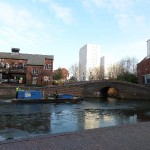 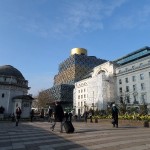 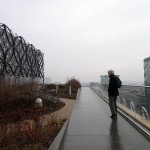 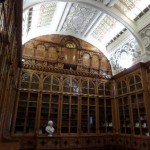 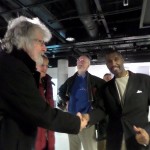 As it was my birthday last Friday and a hotel chain was doing a “too good to miss” offer for the weekend we decided to be tourists in Birmingham even though it is only 10 miles away. The hotel couldn’t have been better placed, right in the city centre and we had a list of things to see with top of the list being the new Library of Birmingham, just a 10 minute walk away. On the way to visit the Sea Life Centre we watched a barge breaking the ice and which coincidently was named “Aquarius” my star sign. Then to the new library followed by a visit to the Willard Wigan amazing miniatures exhibition on the 3rd floor and we were lucky enough to meet him and shake his hand. I didn’t realise he comes from a couple of miles away from where we live. At the library I was really impressed to see that they had kept the Shakespeare Memorial Room from 1882 and rebuilt it in the rotunda on the 9th floor. We finished the day seeing the new exhibition at the museum displaying “The Staffordshire Hoard” where we stayed so long we actually got locked in! Finally had a brush with the law as met up with our daughter, a police officer, who was on duty in the city centre that evening. She looks too small to be driving a large police car but it was a brief meet as a call came in, the blue lights came on ……. and off she went.

The only real second hand book shop in the city centre “Readers World“ (video shows shop eventually) was closed when we got there as we’d left it a bit late but as I’d been there recently I wasn’t too bothered. Back to books proper next week. 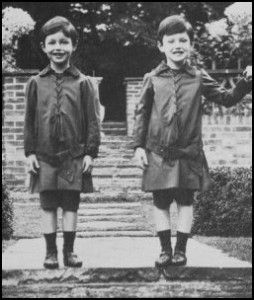 I’ve often mentioned how unattractive I find some titles as I do judge a book by its cover. It was while sorting the 1974/75 titles in the ‘Grand Strategy’ series I found what an amalgam of different image sources had been used although not altogether unpleasing. I then looked at some of the later reprints and realised it was all down hill from then on. I have picked one title ‘Operation Sea Lion’ by Peter Fleming, Ian’s brother as I’m sure everyone knows, and scanned three versions from 1975, 1984 and 2003 as below. Peter often described himself as “a kind of uncle of James Bond’s” 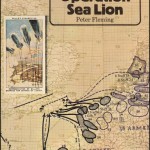 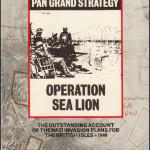 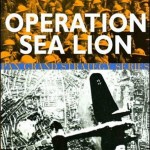 ……………. and in spite of me being determined not to I have added to Barbara Cartland’s covers page making the number now 102!

Just noticed that Rod Tayler died on January 7th and although he appeared in many films I always think of him in Hitchcock’s “The Birds” by Daphne du Maurier and the PAN Book cover by George Sharp from 1977. 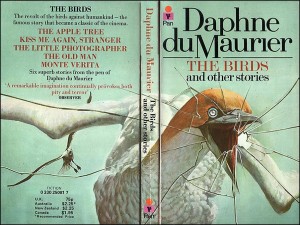 Peter Tiejten (whom I’ve mentioned before and worked with Ken Hatherley in the Art Studios at PAN in the 70’s) was responsible for book promotions. I have several photos of  bits and pieces used to promote the 4th book in the ‘HHG’ series “So Long and Thanks for All the Fish’ 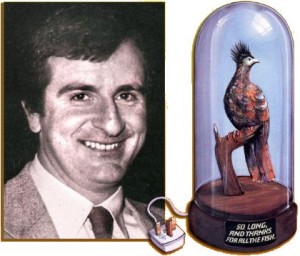 Peter writes “Douglas Adams always caused the cover and promotion departments loads of problems because of his late delivery of manuscripts. Usually the cover and display material had been completed before Douglas had finished writing the book – which meant anything went. “So long, and thanks for all the fish” called for a stuffed bird in a display case on the front of the brochure (obviously!) and inside, another picture showed the plug having been inserted in a socket; the bird had disappeared from the perch and all that remained were a few feathers! Each display bin was sent out with “a fistful of feathers” along with the books. Douglas was a lovely chap who very kindly signed a copy of “So Long…” for me BEFORE it had been printed. How? He signed a blank dummy book – which I still treasure!!! ”

Gary Day-Ellison, PAN Design and Art  Director (1977 to 1988) at the time said “Now, this is what I mean by massively late. Sales needed a cover to rack up the orders. I had to deliver the design for the hardback jacket before Douglas produced the book. I made him promise to tell me what he had in mind. On his way out of the Fulham Road offices he stuck his head round my office door to brief me. He said, “It’s called ‘So Long and Thanks for All the Fish’. And left.I sat, lost for words. A few minutes passed and his head re-appeared, “But there are no fish in it.“, he declared – and fled. This left me license to match enigma with enigma. And when the penny eventually dropped, it landed in a pint of Guinness and produced a ‘lenticular print‘. I found one of a walrus that morphed into a dinosaur, originally produced as a give-away for a cereal packet. Douglas Adams wrote in my copy ‘The silliest jacket in the history of history itself'”

I think 2015 should be the year PAN celebrates 70 years but they probably won’t until 2017. PAN was registered as a limited company on the 1st September 1944 and their first title ‘Tales Of The Supernatural’ was published in 1945 hence 70 years this year. For some reason or other PAN decided that ‘Ten Stories’ from 1947 was their first title (well it is numbered 1) but their CEO up to September 2007 Richard Charkin, on his blog, agreed with me. I’m too modest to also mention the several glowing reference he gave to my website such as “Anyone who is the least bit interested in the history of publishing will enjoy Tim’s brilliant ‘First 25 years of Pan Books’ website. In particular, the covers are sensational, the site has scores – all evocative” 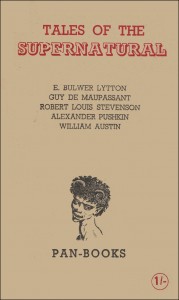 A couple of PAN related ‘projects’ I have in hand include a visit to the ‘British Museum’ to actually see the original bronze on which the ‘Golden PAN’ award is modelled now it’s back from it’s world travel’s and not normally on display. The other is updating the pages on the founder of PAN Books, Alan Bott. I have a family photo album that belonged to his son, Simon, (kindly lent to me by his son, Adrian) and I will include a lot of these soon. Here is a sample one of A J Bott with A S Frene(?) in front of a Desoutter Sports Coupe from 1929 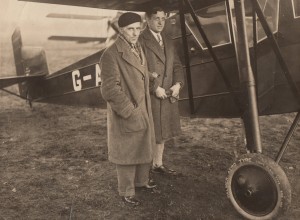 Finally I have a small pile of 6 Barbara Cartland titles to add to her page which will bring the total shown up to 100, definitely going to stop there!