We were away in the camper last week and in spite of minus overnight temperatures we were very snug and cosy. While out and about we visited Stowe Gardens, a National Trust property, which has just opened up the ‘Hayloft’ for second hand books and we helped to build up their stock. Surprisingly I din’t buy anything but I did get a Dick Francis from the campsite on the way back!

Bit of a hotch potch this week including the missing edition of ‘Bomber’ coming to light but I can see why it was on the shelf of titles to be replaced as it is very tatty. 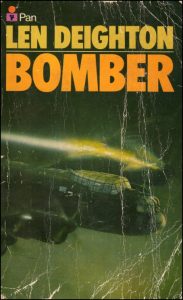 I also came across my 1988 copy of ‘Idols’ featuring celebrity mask which shows the diversity of PAN titles and which have not been made. It’s very tempting but so far I have restrained myself. Another example of how diverse was the range of PAN titles. 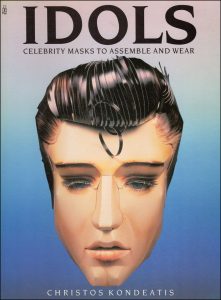 Having had a glass negative for part of the cover of ‘The Land of Shiner’ for a while I decided I needed to display it better than in a photo frame and when I saw the ‘tracing pads’ on eBay for a couple of pounds I thought I’d try one and it works well. Now to figure out a way to mount safely it on the pad so it can go on the wall. 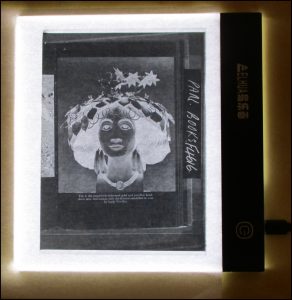 ……. and finally a surprise in a copy of ‘Senor Saint’ I’m used to finding loose cards for things like the ‘Prudential’ and sometimes bound in but as I was about to recycle a reading copy for a better copy I flicked through and found the tatty copy had two cards bound in. Looks like I’m now going to have to keep it as not had one like that before.

Having speculated on why PAN only published three Robert Rankin tiles I’m now wondering why it was similar with Liz Cody? PAN published her first Anna Lee novel ‘Dupe’ in 1982, followed by the second ‘Bad Company’ in 1983. Her third ‘Stalker’ was published by Collins in hardback in 1984 but a paperback edition didn’t follow until Bantam’s US edition in 1989 with a UK edition from Arrow in 1992 as a TV tie-in. There are six Anna Lee titles in total with ‘Head Case’ from 1985, ‘Under Contract’ from 1986 and ‘Backhand from 1991 being the other three. 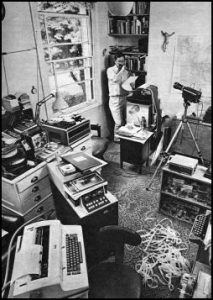 I’d also thought PAN published a lot more Len Deighton titles than they actually did with a grand total of TWO found so far. I will be going through my many years of Whitaker’s “Paperbacks in Print’ to see if I’ve missed any. There is a tenuous link to a third PAN ‘The Valley of Fear’ by Conan Doyle in that Deighton wrote the introduction. He is also mentioned on the front of ‘The Day Before Sunrise’ and ‘All The Drowning Seas’ with a couple of endorsement lines.What is really annoying is that I know I have a copy of ‘Bomber’ with the aeroplane on the cover but can I find it? I think it must have got misplaced on the shelves when I moved to the collection. According to one website ‘Bomber’ was the first book to have been written using a ‘word processor’ supplied by IBM.

…. and finally pleased to see the Wolverhampton Pop Up Bookshop is back for two weeks from today. I can usually find a few titles and I’ve already spotted one I’m interested in in their advertising photos. 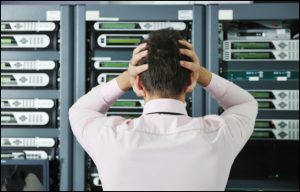 After saying the moving of my website to another server so it could be secure seemed to have worked, well I seemed to have spoken too soon. On Tuesday it went down! For four and a half hours I was one of the 5% that my hosting company told me were affected on their clustering Linux servers. Now usually I’m more than happy to be in the minority but not this time although dare I say it, things appear to be back to normal. I am left wondering how clustering servers go down when I thought the idea was you could switch between them if problems occurred? 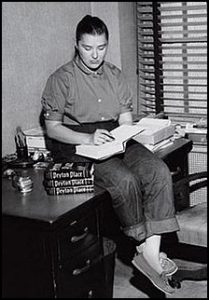 Back to what we should be talking about and that is PAN Books and in this case those from Grace Metalious. I did look to see if there was any specific date attached to her for now but unfortunately not. The reason I’m including Grace is that I picked up a 1970 edition of ‘Return to Peyton Place’ and looked to see how many variations I had of this and her other three titles published by PAN. The results are HERE and I’m sure there must be others I’ve not got. I also have the original artwork shown but have no idea as to the artist, can anyone help?

Metalious was awarded a posthumous ‘Golden PAN’ for selling over a million copies of ‘Peyton Place’ having died in 1964 at the all too early age of 39. Ian Fleming’s ‘Golden PAN’ was also awarded posthumously.

I’ve now got a copy of ‘Chalkhill Blue’ with the Stuart Bodek cover. The third title in this series ‘Painted Lady’ doesn’t have a Bodek cover. I also found a 1982 Guinness calendar with an example of his work. It includes pictures from other PAN artists like Mike Brownfield and Chris Moore. 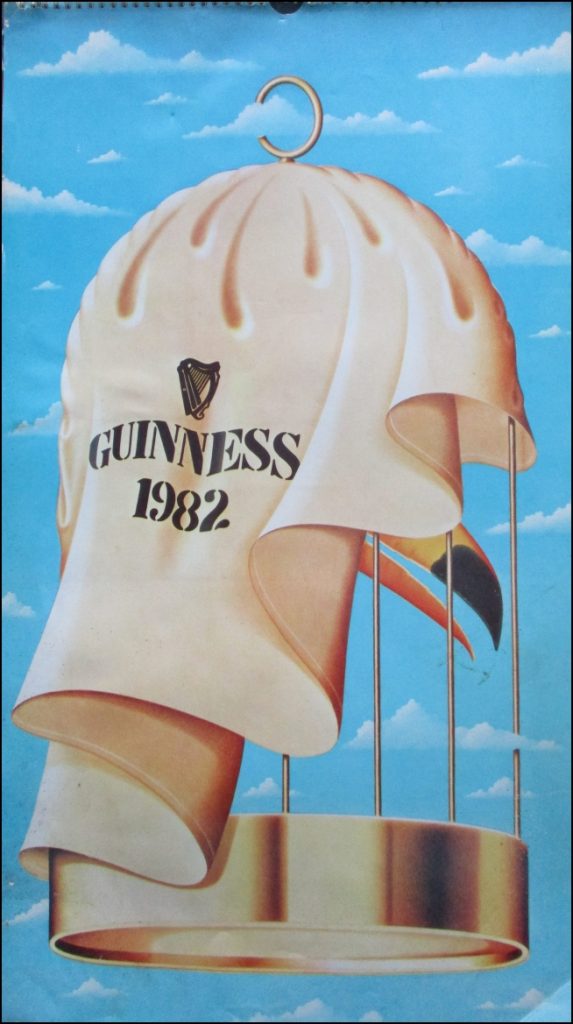 ..… and finally my wife and I were going to go down to the south coast last week to park the camper on Gordon Young’s drive while I got the rest of his story of his rise from ship’s boy on the ‘Laloun’ to export manager at PAN. Unfortunately, his wife of only 5 months, Chrissie, has gone down with shingles. We wish her a speedy recovery and hope to reschedule when the weathers a bit better in the Spring. 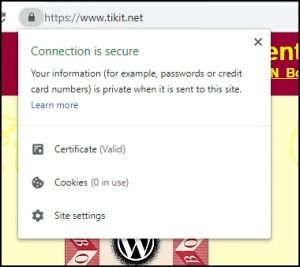 After being away for few days in North Yorkshire I came back on Thursday, bit the bullet and started the process of obtaining a SSL (Secure Sockets Layer) Certificate for my website. The first part involved moving the site to a secure server and then issuing the certificate. This seemed to go fairly well but my site still said ‘Not Secure’ I got in touch with the help desk of my hosting company and they said I needed to add extra code to a file in the root directory. This was beginning to be a little outside my comfort zone but after making backups and Googling to find the code I went ahead and it appears to have worked as it now says it is a secure site. Unfortunately, due to my site being 19 years old next month, there is a lot of Legacy coding apparently (mainly frames which were cutting edge in 1999!) so as a work round until the day I update it all(!) the Blog and Search, because they use external links, load into a new window. Before nothing appeared when links to these pages were clicked possibly due to the enhanced security unless anyone knows better?

After speculating on why PAN only published three of Robert Rankin’s Brentford titles I heard from Mike Petty, who took over the Picador list from Caroline Lassalle in  1977 and he kindly offered the following information;

“I can shed some light on your Robert Rankin query. I published the Trilogy at Pan, thanks to some prompting from Alan Aldridge. I can no longer remember why the covers were so different, but I suspect No.1 didn’t sell so they thought they’d try a different approach for No.2. I’d left Pan by the time No.3 came out. You’d have to ask David Larkin or Gary Day-Ellison what the story was.

After a couple of years at Chatto I then moved on to Sphere/Abacus. I kept in touch with Robert, and nothing much was happening for him at Pan, so I published the Trilogy again, in one volume this time, plus No.4, The Sprouts of Wrath.

I then moved to Bloomsbury, where I published Armageddon: The Musical, They Came and Ate Us and The Suburban Book of the Dead. These were picked up in paperback by Corgi, who subsequently republished his backlist and became his primary publishers. I can’t remember how that happened, but ££ probably had something to do with it” 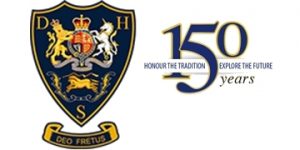 I recently contacted Terry Sandy at Durban High School regarding one of their alumni, artist Stuart (or Steward) Bodek and Terry replied at an amazing speed. He gave me the name and email address of a fellow pupil and artist, David Whitehead, who moved to the UK at the same time a Stuart but I’ve not managed to make contact, does anyone know of him?  Stuart was born in South Africa on the 17th of July 1947 and died all to soon in January 1996. I email Cecil Vieweg as he was a fellow South African just on the off chance and he kindly replied;

“Yes! I remember Stuart Bodek very well. I met him on arrival at Artist Partners, fresh faced and full of hope and ambition, but awestruck and humble meeting some of the old pros. Although he had some advertising experience, his knowhow and methods were still be experienced. I took him under my wing and we became good friends. Such a great pity that his life ended at a relatively young age. I’m not to sure about the details, but he died on or shortly after a tennis match. Late eighties, early nineties? He was represented by Artist Partners”

I have since found that Stuart married Carolyn Kaffel in Hendon in the early part of 1979. I’ve put a few of his PAN covers HERE and also included one by Liz Moyes as a place holder. Annoyingly I ordered the 1984 copy of ‘Chalkhill Blue’ a while ago and got the 1988 edition without the ‘PAN Man’ logo and so gave it away as in my new inclusion rule. Last week I ordered the 1988 edition (which broke my new inclusion rule!) as the cover was by Stuart Bodek and this time got the 1984 edition! Hopefully the right one will appear next week. 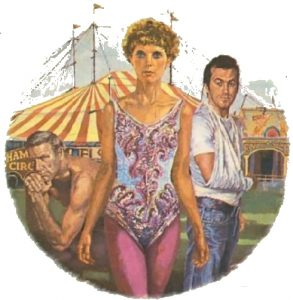