Is there some reason that the few copies of ‘And Now The Screaming Starts’ by David Case from 1973 that I’ve found appear to be a) expensive and b) in awful condition or is it just me? This was originally published as ‘Fengriffen‘ but not by PAN. This is my copy which has been much improved(!) in PhotoShop. 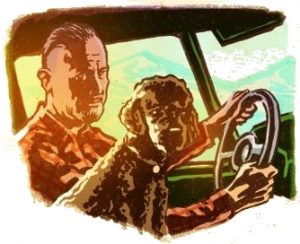 This weeks Hans Helweg’s sketches and maquettes are for ‘Travels With Charley‘ by John Steinbeck. I’ve included later copies with artwork by John Walsh and Brian Sanders. Annoyingly, after much hunting, I cannot find my copy by Brian so have not been able to include a decent scan. I thought I had found another copy on a French site and on checking was told it was, as stated in the description, with a cover by Brian so why when it arrived was it the one with a cover by Walsh? How hard can it be to get this right and it now involves me sending it back, I’m wondering if it will be as easy now with customs etc. we have left the EU. As I have said many times I did NOT vote to leave.

This might be just me but I’ve only just noticed the logo for the Fontana children’s imprint ‘Fanfare’  next to the one for PAN’s ‘Piccolo’ have a similar musical theme. As I said it might just be me ……..! I’ve tried to find out which came first and so far ‘Piccolo’ wins as they started in 1971 while the earliest titles I’ve found from ‘Fanfare’ are dated 1972, a couple of  ‘Tamworth Pig’ stories by Gene Kemp.

Amongst the many sketches I have in Hans Helweg’s folders are several for Nevil Shute covers. I’m starting to compile a page featuring Hans’ Shute covers and the preliminary sketches and paintings that go with them which can be seen HERE. With them not being signed, well not obviously although he did put in the occasional HH, I’ve used the sketches, paintings I have or where in his workshop, the printers proofs he had on file and his list he made of the covers he could remember. I was pleased to find X117 was one of his as he had a printers proof for the 1962 edition and in his list he says the 1968 version is listed as a Redo.

A while ago, while featuring Ed McBain I mentioned that he was really Evan Hunter and PAN only published one title  under this name, ‘Nobody Knew They Were There’  Now I know you’ll find this hard to believe(!) but I was wrong and have found another one and I think there may be more plus he also wrote as Richard Marsten so ‘The Spiked Heel’ was another published by PAN. It says ‘Come Winter‘ is the sequel to ‘Last Summer’ although this latter title wasn’t published by PAN.

After including the obituary of David Larkin from the Macmillan magazine last week, this issue also included a write up on ‘Cover Me’ by Colin Larkin published by ‘TELOS’

It nice to keep in touch with artists and in this case it’s Cecil Vieweg. I recently came across his original artwork for one of the 32 cards inserted into packs of cigars. There is a very fetching photo of Cecil on the back of the folder with him holding another of the cards. I have added the artwork and the card (although not PAN) to the bottom of his page. Cecil has also promised me a CD of some of his preliminary sketches so looking forward to that arrive soon.

For a long time I’ve tried to track down Pat Owen once resorting to ringing all the P Owens along the south coast without success but I did have some interesting conversations! . Fortunately Kathy Ford, Sam Peffer’s great niece, pointed me in the right direction and if I had known his first name was actually Cyril I’d have found him much sooner. Unfortunately Pat passed away on the 26th May 2017 but I am in contact with Sue, his widow, who sent me an a article that appeared on the news letter of the ‘Guild of Aviation Artist’ of which Pat was a member. I hope they don’t mind me including it here. I need to sort out a page for him and will put one on the site ASAP but in the meantime HERE is the link to an article featuring Pat and Sam which I put on the site quite a while ago with kind permission of Steve Chibnall.

As I have mentioned previously David Larkin passed away last year. His brother Colin wrote an obituary for the Macmillan newsletter which I am now allowed to include here as it has now been published. Thanks to Colin for letting me have a copy. Click HERE to view as a PDF

Although I have yet to read all of a novel by Jackie Collins I have mentioned her several times as she was one of PAN’s best selling authors receiving 9 (?) ‘Golden PAN Award’s for selling a million copies each of 9 titles. I am currently trying to track down all the editions with covers by George Sharp from around the late 1980s but again the old problem of no image from a seller and the same text block and date used for several editions. These are ones I have or have found on the web so far HERE but if you can help with others please get in touch. Some of the dates also need double checking as they are outside the range for this series. I contacted George to ask him about them and he said “As for the covers I did for Jackie Collins I can only remember one or two of them. My son Ben has the original artwork of one hanging in his office. I like it a lot! Jackie was a most likeable person, very relaxed and natural. Everyone liked her” Photo below shows George on Jackie’s left.

While going through the list of Hans Helweg covers I found one listed as ‘Castle Ugly’ which was not a familiar title. I know the list says they are PANs but I have also found there are a few from other publishers and magazine illustrations. Luckily I found one copy online from Maurice at Zardoz and was really pleased with the condition when it arrive but a bit disappointed with the artwork on the cover although it is clearly signed H.Helweg so Hans liked it as he didn’t sign all his work. As far as I can tell PAN only published this one title from Mary Ellin Barrett (born November 25th 1926) who was the daughter of composer Irving Berlin.

This weeks sketches from Han’s folders are for ‘I Leap Over the Wall’ by Monica Baldwin of which PAN published many editions with cover variants. Han’s cover goes with the 1971 edition.