A  couple of years ago, on a flying visit to Amsterdam, I picked up a PAN first edition of ‘O Jerusalem’ for a euro on the market. I looked at the time if there were other books from PAN by the same authors and there were three. I managed to get hold of two but the thirid ‘Is Paris Burning’ was very elusive or at a silly price. Luckily a saved search came up with two copies recently but only the second one I received was correct. Does anyone want a haardback copy in French which was sent to me as a PAN paperback? Still trying to track down the cover artists.

Back in the early 90s, at the time of the infamous Bonham’s auction, Simon Marsh-Devine produced a catalogue listing artworks by Sam ‘Peff’ Peffer, Pat Owen and Edward Mortelmans that were for sale. I had this on the site as a Flash ‘book’ but with the demise of Flash  it has become unavailable so as a compromise I’ve just put all the pages on one page which can be viewed HERE I was only reminded to check this after it was mentioned in an email from book dealer Ray Steptoe plus thanks to Jules Burt for letting me borrow his copy of the cataloge to scan a few years back. I think Simon Marsh-Devine is still with us and living around Weston Super Mare, can anyone confirm that as I’d love to ask him a few questions?

I find it odd that just when I think I must have all the covers for a title up pops another one and last week it was not one but two. The first is painted by Jean-Paul Tibbles for a later edition of ‘Falconhurst Fancy’ by Kyle Onstott and Lance Horner while the other if by Geoff Hunt for ‘Brown on Resolution’ by C S Forester.

This weeks artwork by Hans Helweg is for the 1966 edition of H3 ‘Kennedy’ by Theodore C. Sorensen. I’ve also added another four titles published by PAN with a link to the Kennedy clan on the page.

Having been a member of the Jackie Collins fan club ever since I found PAN published her books I had to watch ‘Lady Boss – The Jackie Collins Story’ on BBC 2 last Friday hoping for a reference to PAN but sad to say no sign of any of their covers, just the US editions. 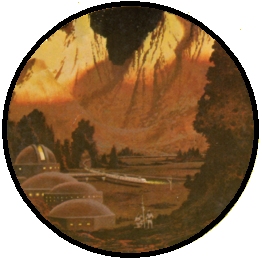 Having managed tp pick up a copy of ‘Earthlight’ signed by Arthur C Clarke I looked to see how many different covers PAN used over the years. I have at least five with covers by GORDON, William Francis Phillipps, an awful one with a photo, Chris Foss and one that was first used by Ballantine by Dean Ellis. What is a little unusual is that my 1974 PAN edition has the edges coloured red while the Ballantine editon from 1975 has yellow although this is much more common on US paperbacks.

This weeks Hans Helweg artwork is for the Pearl Buck title’ Command the Morning’ of which PAN appears to have published three editions with the later two having the same artwork by Hans.for which he got £50.80 in April 1967. I have queried the artist for the earlier edition from 1962 as J Oval (Ben Ostrick) although it looks a little like a SHELDON? 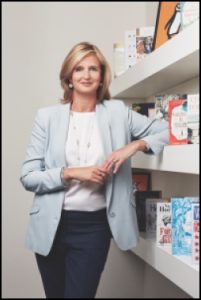 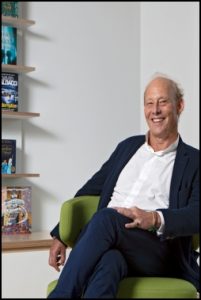 It was announced last week that the current C.E.O. of PAN Macmillan, Anthony Forbes Watson, is stepping down early next year and will be replaced by Joanne Prior who was MD for Penguin General. I’m wondering if she has plans for a 75th Birthday Bash in 2022? I met Anthony back in 2017 in London at the 70th Celebrations  where he presented several ‘Golden PAN Awards’

I’m still looking through Hans Helweg’s folders and there are several small paintings which I am presuminig are working ideas for the real thing. Here are 3 such paintings and while all look vaguely familiar I can’t actually put a title to them apart from the first one might be an alternative for ‘The Horsy Set’?

I’m still trying to track down Sam Peffer covers to go with his reference photos and I was convinced I’d got one for ‘Trial By Fury’ but turns out to be not quite right., It was while looking at the cover it reminded me of something Sam and I now have in common. When he was 91, not quite there myself yet, he slipped on a step and ended up with a broken hip that needed to be replaced.

This weeks Jean Plaidy series is for ‘The Plantagenets’ of which PAN published the first 7 of the 14 titles and so did not include ‘The Follies of the King’, ‘The Vow on the Heron’, ‘Passage to Pontefract’, ‘The Star of Lancaster’, ‘Epitaph for Three Women’, ‘Red Rose of Anjou’ and ‘The Sun in Splendour’ As with other series the same artwork for several titles was used by Putnam in the States.

After watching ‘Timeshift’ on BBC4 last week I can add a couple of screen captures for the ‘PAN As Seen on TV’ page. A very quick black and white scan of PAN tiltes plus some in colour later (you need to scroll to the bottom of the page)