I recently contacted cover artist Peter Gudynas to ask if he did more than one cover for PAN as I’d only found ‘The Second Trip’ by Robert Silverberg crediting him. He sent me a very detailed response and the answer was basically ‘Yes’ although he did paint a couple of covers for the PAN related US imprint TOR Books in their ‘doubles’ series.

Peter also including a scan of the original artwork plus a printers proof. He said:

“I worked as a science fiction artist for many years during the late 70’s, 80’s and 90’s. I produced many covers and received recognition in the UK, USA, Germany and France for my Science Fiction art. This has included commissioned book cover design and illustration artwork beginning in the late 1970’s, through the 80’s and 90’s, for world renowned publishers including Penguin Books, Panther Books, Harper Collins, New English Library, Pan Books, Daw Books, Bantam Books and Tor Books, amongst many. Credits include cover art for authors such as J.G.Ballard, Philip K Dick, Stanislaw Lem, Rudy Rucker, John Sladek, Bruce Sterling, Frederik Pohl, Robert Sheckley, Harry Harrison, Issac Asimov, Robert Silverberg, Pat Cadigan and Mick Farren, to name a few. In 1999 I won the Waterstones Booksellers award for best book cover artwork for the novel Diaspora by Greg Egan, at the Association of Illustrators Images 23 Best of British Illustration exhibition, held at Royal College of Art London”

Funnily enough Peter only lives a few miles away from me so I feel a trip over to get a signature may be called for.

I have added another Peter Corris title but not a Cliff Hardy novel, a book called ‘Golf’ which unsurprisingly is a selection of poems, stories etc about golf. I think it takes the prize for worst cover of the month but having looked at other work by Ann Howie I glad to see this isn’t a representative example, some of her landscapes are very evocative.

I’ve also added some more of the ‘Bony’ covers by Marinella Bonini but no response to my email to her so far but maybe using Google translate into Italian didn’t quite do it!

…. and finally here is a self portrait of a prolific PAN cover artist, anyone know who it is? Answer next week. 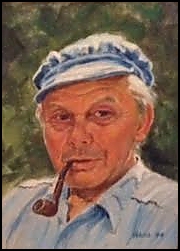 Last week I had several emails that I need to follow up and should provide great material for later blogs including tracking down Sue, the widow of Hans Helweg. 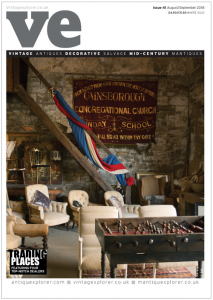 Back in October last year I had an email from journalist Stuart Webb who was looking to write an article with a PAN slant. He asked several questions and looking back I’m not sure how many, if any, I actually answered but that hasn’t stopped him writing a very informative piece about someone, whom I feel I should have known but didn’t, Louis Shabner.
A couple of weeks ago Stuart contacted me again to say his article had been published and in his excellent piece  explains Louis will probably be better know to PAN Fans as cover artist  ‘SHELDON’ and not to be confused with another PAN cover artist H. Harry Sheldon.  Louis, as Sheldon, painted at least 23 covers for PAN in the early 60’s, 21 of which are shown in the article which appears in ‘VE’ magazine Issue 41 and can be purchased on line at their website www.vintagexplorer.co.uk

The article gives a detailed account of his life and features several other evocative examples of Shabner’s work. It tells how the family tried to sell some of the originals back in 2017 using on line sites and an auction house with mixed results. The family are left with 17 they are going to keep. Stuart finishes by asks where others works may be and I’m wondering how many other PAN covers Louis may have painted that are unattributed? As usual if anyone can help by adding further information please let us know.

I experienced one of those weird coincidences while I was typing this as I got an email from Gordon Young whom I’ve mentioned before and who now lives in Milford on Sea. Gordon was emailing to say he had just heard that George Bath, who joined PAN the year he left in 1964, was now actually living a half a mile away! Seems like Milford was and is a popular place with the publishing trade as I’m sure the name has come up before.

To celebrate ‘Ekka Day’ in Brisbane on Wednesday all the books mentioned today have an Australian connection.

Having heard from Ray down under  regarding a variant of a ‘Dam Busters’ cover he emailed again to let me know of another ‘Young Lions’ a later edition which so far I’ve only found for certain on Gumtree in South Africa. Many sellers list an edition as 1981 but then say something like they have 5 copies available so it’s always pot luck. Thankfully Ray sent me a scan so I’ve included that at the moment. I think it’s interesting how the title and author have switched, the former becoming subservient to the latter (Still wondering what happened to the soldier on the left?)

While asking about Corris titles Stuart sent me his cover scans plus a list of other PAN titles published in Australia from the back of ‘White Meat’ I’ve decided my challenge is to get them all and so far the total is three. I have to say I had real trouble trying to even find an image of ‘Coins for the Ferryman’ just to put on as a place holder but then struck lucky and got a copy from S.A. What a disappointment, no wonder nobody bother to scan it before!

As I mentioned last week we have been out and about in the camper dropping off books at NT second hand book shops but that didn’t preclude me buying  a few, the rule is no more than we leave. I managed to pick up a couple of Arthur Upfields I hadn’t got and it turned out they were the Australian printings with covers by Marinella Bonini. I have found a lady of that name in Italy so I think an email is called for.

Last but by no means least I am still rescanning the whole collection and am now up to ……… PAN 13, well these things can’t be rushed. I have three different editions and it was while just checking for the printer I noticed my 1948 edition has a booksellers stamp in it. This is form “Dymock’s Book Arcade, George Steet, Sidney’ which I’m pleased to see has been there since 1879, and is still there, 139 years later.

We spent the last few days travelling in our camper around National Trust properties with second hand book shops dropping off books. They are more than happy to receive ones that are actually more than two years old and not just fiction paperbacks unlike charity shops. It took two days and four visits before we could begin to move around  the camper without having to shift boxes every time. We eventually visited seven properties (and not one PAN spotted on a shelf to add to the ‘As seen in a NT property’  section) finishing up at Baddesley Clinton on what was advertised as the first day of their annual weeks book sale. They had been setting up the day before and had been happy to sell and had actually raised £1,200 on that one day while last year it was only £400. The total last year was well over £50,000 so who knows what it might be this year but at least £11 of it will be mine!

Having shown some of the E V Thompson titles with covers by Cecil Viewig I picked up  ‘Becky‘ but with a cover by Gwyneth Jones. This cost me all of 50p and I was even more pleased to find it was signed by the author.

I also picked up another version of the Mollie Hunter book ‘The Ghosts of Glencoe’ with an unattributed cover but again pleasantly surprised to find it signed by the author although this one cost me a whole £1.

I also found a reference to a Geoff Taylor cover on his website he did for a Mollie Hunter title that implied it might never have been used but I managed to find it had and although not Piccolo but Fontana Lions I’ve added it to both the Geoff Taylor and Mollie Hunter pages.

I also heard from Ray in Australia last week but I’m going to hold fire on that until next week where hopefully it will tie in with another couple of items.