Still trying to hunt down a few John D. MacDonald’s ‘Travis McGee’ editions to complete the collection. I’ve put them by date as far as I can ascertain but as usual the same text block was used with different covers and the date was not always changed. I have also found another eight covers but not managed to track down copies as they are most often shown as ‘stock photos’ on the big player websites. Click HERE to see the ones I have so far.

While sorting the ‘Travis McGee’ titles I started on Ed McBain’s  ’87th Precinct’ series where it is the same problem with dates, not always being easy to decode. This is going to be a my project for the next coupe of months. In the meantime here is a scan of the cover of the only book PAN published under one of the pen names Salvatore Lombino used namely Evan Hunter before he started to use Ed McBain. I think there were around 55 titles in the series but not sure if PAN published them all as I’m still compiling the list.

I need to find another copy to see if they are all this insipid green or has it just changed colour over the last 47 years as I suspect?

I would like to say a huge “Thank’ You” to Jules Burt who very kindly gave me a copy of PAN’s 50th Anniversary catalogue. I remember a copy coming up on eBay at the same time as the special hardback edition of ‘The Dam Busters’ for selling a million copies. As I was not going to be around when the auctions finished I decided nobody would want the catalogue so bid low but high on the book – I was completely wrong so I’m really pleased to get a copy at last. Jules also lent me a fascinating early bibliography of PAN books I’d not seen before and I’ve photographed it and sent it back. These were part of the amazing haul Jules got recently and HERE is a link to the first of two videos of him starting to unpack the PANs. There are a several with dust jackets but there doesn’t appear to be a list of those that do and that don’t but HERE is my reference page of the ones I found so far. Please let me know if you have any not shown. 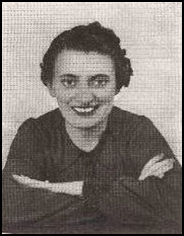 Mary Mussi, née Edgar (27/12/1907 to 2/3/1991), was a British writer born in London. She was the author of over fifty romance novels as Mary Howard and also wrote over ten Gothic romance as Josephine Edgar. 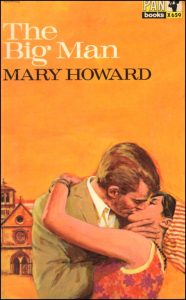 She is one of only two novelists to win the Romantic Novel of the Year Award by the Romantic Novelists’ Association three times (Mary Maddocks won four times)  She also won the Elinor Glyn award in 1961 and was a past chairwoman of Society of Women Writers and Journalists. PAN published eight of her titles as Mary Howard but I’ve not found any as Joesphine Edgar. You can see the covers HERE

Fellow PAN Fan Jules Burt certainly struck lucky recently with a haul of eight boxes of PAN’s and six of paperbacks from other publishers, not that I’m envious in any way!!!!!! Click HERE to see a selection of the fascinating videos Jules has posted recently and keep visiting to see the boxes being unpacked of which this is a tantalising glimpse.

A while back, when I had an ‘Australian’ special with titles printed in Australia I included ‘Virginity Stakes’ by Don Townshend with a cover by Paul Sample. At the time Paul said “Hi Tim, Yes, it is one of my illustrations, dating from the early 70’s……….I can remember drawing it, dip pen, ink and watercolour. I did quite a few book jacket illustrations besides all the ones for Tom Sharpe’s books. Not all of the jackets were for Pan though” Since then I’ve come across ‘Gland Times’ which is the same book with the same cover but was the earlier UK printing. Not sure if there is much to choose between either of the titles? Click HERE to see them both. 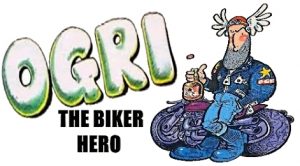 Paul was born in 1947 in Leeds as is best known for his cartoon strip Ogri, and for the covers of paperbacks by Tom Sharpe and Flann O’Brien, posters for BBC Radio Two and advertisements for the Post Office, Ford, Dunlop, and British Airways. Paul trained at Bradford College of Art and at the Central School of Art and Design in London, where he studied graphic arts. As a student, he landed commissions from The Times and The Sunday Times, the Daily Telegraph and Today, for which he designed and drew “The Zodiac Files’” strip cartoon. His first commission was for Management Today in 1968, for which he was paid £45. He went on to do freelance work for Melody Maker, Rockstar, Men Only and Skateboard magazines.

When you buy a book that says “PAN Books 1982 Great condition for a used book! Minimal wear. the uncorrected proof in yellow wrappers” you would not expect to receive the 1981 hardback book club edition would you, surely not that similar to anyone who knows or cares about books? I admit it was cheap but the number of emails I got from the company asking for their label number which I had already sent them, then the ISBN which as a book club edition it doesn’t have and finally the copyright date. They eventually conceded it was wrong and gave me my money back. I’m not complaining about them that much, it’s more the fact I wanted that proof copy which apparently no longer exists. Now I may have a suspicious mind but at  £2.80 including postage I suspect they realised it was worth a bit more!

I heard recently from Peter Tietjen who asked about a post I put on a while back. It featured a copy of a poster to advertise the David Morrell title ‘The Totem’ which I has shown as it had a cover by George Sharp. Peter was interested as he had designed the poster and wanted to know if I knew of a copy that was not behind glass as there were reflections. I contacted  David who very speedily replied:
“Hi, Tim. I loved the Pan covers from the 1970s. When I have the time, I’ll arrange for a photograph of me next to the TOTEM poster that’s on my wall. Here’s a photo of another copy I have (I spread it on a table—it’s so big that I can’t get a perfectly proportioned image of it)”
Here is the photo he kindly sent, Peter said it is based on ‘Man with a Newspaper’  (L’Homme au journal) by René Magritte (1898–1967) in the Tate

For quite a while I’ve been trying to contact artist Jean-Paul Tibbles and every now and again I fired off emails to an artist with the same name thinking there can’t be too may around. Up to last week I had no luck but this time I made contact. I was going to save this news to put with a page of his PAN covers but I was so pleased I’m including it now. I asked Jean-Paul if he had a photo I could include and he replied to say the pilot on his cover of ‘A Piece of Cake’ was a self portrait! More on that in a couple of weeks.

From talking to fellow collectors I know it’s not just me being forced(!) to sit in front of a computer for hours on end as a consequence of COVID-19. On the minus side I know it is proving to be more expensive in terms of purchases but on the plus side feel I am doing my bit by keeping booksellers, the postman and delivery drivers in full employment! I though the above cartoon I found on a book collectors ‘Facebook’ page particularly apt, well it’s how my wife sees it.

Still looking through the negatives Kathy (Sam Peffer’s great niece) kindly gave me and I found one I could link to ‘To Love and be Wise’ by Josephine Tey of which PAN printed at least five editions with different covers between 1953 and 1973.  I was also intrigued to see the 1959 edition on the table behind Sam and Roger Hall. It’s almost as it they were sitting in the similar poses to those on the cover.

Picked up yet another signed PAN title inscribed to ‘Celeste’. She has been mentioned before being Celeste Parsons who worked at PAN in the 70’s. The seller also had several more Smith titles all signed to Celeste but I only bought the one as the Kevin Tweddell cover for ‘Cry Wolf’ always make me think of the film ‘Tank Girl’ from 1995.