A while ago I was tempted by an item on eBay namely a copy of “The PAN Book of Card Games” from 1960 which appeared to be hollowed out to give a secret compartment. I was wondering if this was an amateur job but quite the reverse. The seller told me her husband was a sales rep for PAN in the 50/60’s and he gave these away as a novelty including two packs of cards. Unfortunately mine didn’t so I’m showing it with a couple of packs of a later date but if anyone does have a contemporary set then I’d love to hear from you. I did wonder if the cards were the ones shown on the back cover of the book but on trying my packs found they were too big. These cards were printed by the Thomas de la Rue printing company in 1957 for their 125th anniversary and the First International Playing Card Week. The designs are by the French tapestry designer Jean Picart le Doux. I see someone is asking $1200 for a couple of packs on eBay.com so I’d better take more care of mine! I’m hoping to met up with the rep in Chepstow later in the year as he says he has some PAN related photos from his time working for them but he wants to remain anonymous.

The artwork for the book is by Glenn Steward who began working as a book cover artist in 1957 and worked for several firms including Digit Books (1957) and Panther (1958) and then PAN Books producing nearly 150 covers in six years although he continued to work for Pan until at least 1968. According to Simon Marsh-Devine he was still working in 1994 but I can find nothing after this time. As usual if anyone can add any further information I love to hear from you.

I’ve also added another screen capture to the ‘As Seen on TV’ section as the opening credits for the series “Put Your Money Where Your Mouth Is” shows one of the presenters, Philip Serrell, standing in front of a book case with at least three PANs in it. I can definitely identify two X86 “The Intruder”and X434 “YOLT” but not the sixth from the right as it is newer than the others. If you click on the picture below you should be able to see it but it’s not as clear as I would like. My guess is ‘Majipoor Chronicles’ by Robert Silverberg with the Josh Kirby cover from 1983? 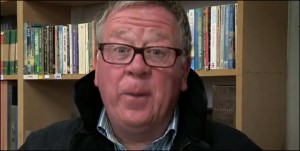 PAN published fourteen fiction and four non-fiction titles by Daphne du Maurier. I have added 33 different covers HERE and I am still trying to track down more images I’ve seen on sites but which were too small to use . I have included a few covers from the net although my usual rule is I have to have the cover to include it but I have ended up with so many duplicates as trying to work out dates/printings/editions etc. is very difficult plus sellers are not always as cooperative as they could be with providing scans. I hope to replace them with scans of my own as I track them down. I’m not 100% sure of the dates of some of the ones on the page so if anyone can help or put a name to the anonymous covers please let me know. 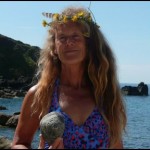 A couple of the covers are by Caroline Binch who kindly replied to my email but we think she only did the two as shown although Caroline did other titles for PAN and I’m hoping she’ll let me know what they were. Other familiar names are Gino D’Achille, Roger Coleman and George Sharp.

Having mentioned Russell Mills in the last blog I have now managed to track down seven of his PAN tiles and I’ve also included a few of the ones he produced for the PAN Picador imprint. Russell not only does book covers but also album and CD sleeves plus accompanying booklets and promotional material. His latest exhibition ‘Cargo in the Blood’ opens in Halifax on 22 February and runs to 19 April 2015

I was also in contact with George Sharp this week and he emailed me an interesting story concerning the cover for ‘Testament’;

“I remember ‘First Blood’ vividly because I thought the book was remarkable. I depicted a moment in the writing when the rifle was being raised into the air as the protagonist – soon to become the hugely famous Rambo  emerges from a hideout in the snow. It was the “Okay let’s go get the f**kers!” moment. So I painted the image to be reproduced like this – upside down. 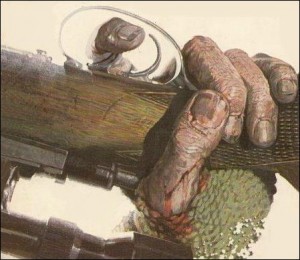 But it was not to be. David Larkin, the art director of Pan at the time, liked the work as being an example of how to paint giving the appearance of being very detailed without actually it being painted in a detailed way.” 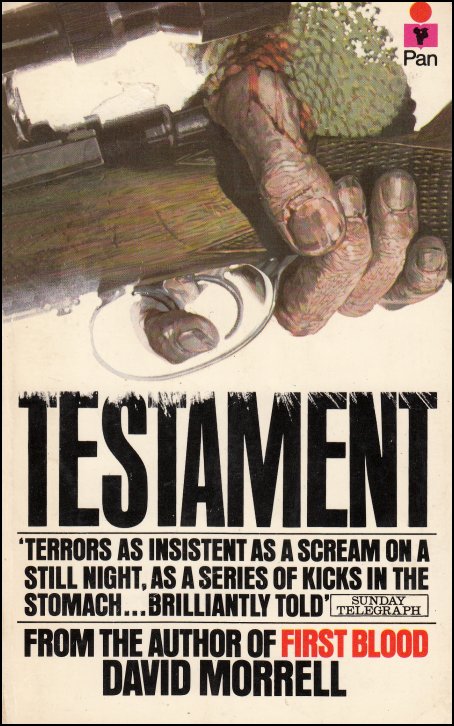 In 1981 PAN decided to bring out a series of four books titled ‘Spotlight On ….” French, German, Italian and Spanish. The format was that they contained clippings from advertisements, newspapers, cartoons, instruction manuals, books etc. all in the language of that particular title. What makes them a little different was that, although using the same format of  representative everyday items of that country on a coffee table, all the covers are by different artists. The Creative Director at the time was Gary Day-Ellison and he contacted four graduates from the Royal College of Art in London to paint the covers which apparently had to be done in a bit of a rush.

I decided to see if the artists are still at work and managed to contact three of the four namely Russell Mills, Chloe Cheese and Cathie Felstead who all kindly replied (are you out there Gary McCarver?)

Russell painted at least six covers for PAN and I’ve tracked down five so if I can’t find the missing one I’ll put up the others next week.