I’m always on the look out for PAN related material so when I saw a copy of ‘Hammerhead’ by Dynamite I had to get a copy. It is either a homage or a pastiche depending on your view point and this particular cover was apparently one of seven variants produced for part one. They don’t seemed to have replicated it for the other five parts of the story. It has what is meant to look like a sticker on the from saying CBLDF from which it gets it variant title and means ‘Comic Book Legal Defense Fund’ (my speller checker is a bit miffed by ‘defense’) 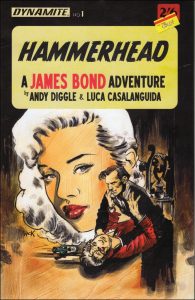 Talking of homage or pastiche HERE is a link to the Honeypot Designs blog (sometimes it asks if you want to continue, I’ve not found any problems so far) It shows several mashups for James Bond books, the challenge this week is to name all the original titles of the covers used! I’ll give you a starter ‘Dark Interlude’ by Peter Cheyney (If you do a search on the site for PAN you’ll get several more)

I’ve also added another Berkley edition of ‘The Return of Moriarty’ which was a lot later edition than the one I thought I’d bought. The challenge now is still to find the two from 1981 and ‘The Revenge of Moriarty’ from 1988.

I’ve also added one more cover by Jas.E. McConnell, namely ‘The Grand Sophy’ which brings the total so far up to eighteen. 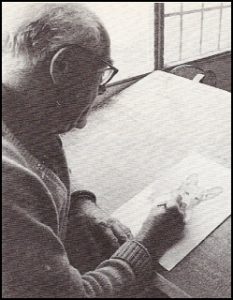 As promised here are 17 PAN book covers by James (or Jas. as he signed) E. McConnell plus scans of the original artwork for 10 of them. If you know of anymore PAN titles please let me know as I’m sure there must be others I’ve missed. One day I’ll get around to updating my database with all the covers to which I can identify an artist. I know James also painted for many other publishers and also ‘Philmar’ the jigsaw puzzle makers. I am very grateful to his daughter, Ann, for the photograph of her father sketching a dog, a sketch she still has.

Ann says in her email “Lovely to find another fan of my Dad’s work! He did a huge amount of covers for Corgi, which when they sold out, put on an exhibition of his Western Art in London, I have the cutting from The Times somewhere! I have written a ‘foreword’ for a hopefully future book on his artwork. He had an article about his work in Illustrators Magazine 18 months ago. Most of his work was commercial so was lost to us. He did over 1,000 covers for Look and Learn. I remember him doing many of those when I was a child and he stopped working in his London studio and worked from home. I am still discovering stuff he did which I had no idea about! He spoke little of his work and I was too young to appreciate it! I have a million and ten questions now, too late of course”

If you haven’t seen the article in ‘Illustrators Number 11’ it’s well worth hunting down a copy and the Book Palace are also selling some of his artwork originals including Corgi western covers. 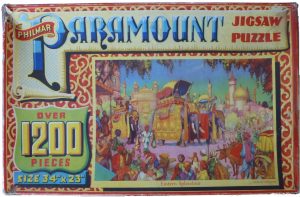 I love the original artwork for ‘The Travels of Jaimie McPheeters’ which is really spoilt by having title stuck on cutting off the top of the hills. If I find anymore I’ll add them and include them in next weeks blog.

Update – while just checking my spelling etc. this morning I found several auction sites selling or had sold works by McConnell. I’ve made a page to show at few of them HERE 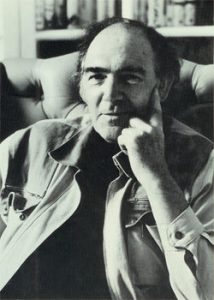 This blog is a little different in that it is not just about PAN editions this week but several versions of a particular short series. This is because I picked up a couple of John Gardner titles published by PAN with covers by George Sharp both featuring the notorious Moriarty, Sherlock Holmes’s nemesis and then found I’d got the same titles from other publishers. Gardner is probably most well know for continuing the James Bond legacy but none of those titles were published by PAN. Quercus republished ‘Moriaty’ in the UK in 2008 while Houghton Mifflin Harcourt did likewise in the US. In 2013 PAN/MacMillan reissued some of his early books as ‘print on demand’ The two Gardner titles were ‘The Return of Moriarty’ which for some reason or other PAN decided just to call ‘Moriarty’ unlike all the other publishers and this was then followed by ‘The Revenge of Moriarty’ In the States it was published by Putnam in hardback while in the UK it was Weidenfeld & Nicolson. The paperback versions were then published by PAN, Berkley and later Star. To see them click HERE 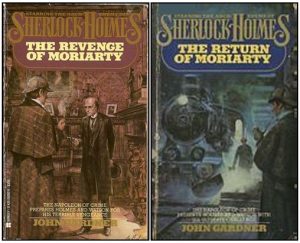 A couple of Berkley editions from 1981 I’d like to have.

One point of interest, maybe, my Putnam copy of ‘The Return of Moriarty’ has a red spot which I thought was part of the design as it is definitely in the printing but looking at other images on-line none of them have it. Back to a more normal blog next week with the Jas McConnell covers as promised last week

Following on from last weeks mentions of Rubik in PAN books here’s another one with a similar slant ‘Folding Frenzy’ by Jeremy Cox from 1981. It reminds me a bit of Rubik’s Snake which I still have somewhere.

I have to admit that occasionally I stray and look at other publishers covers and I especially like the Ballantine Adult Fantasy series. My excuse is that some of these were jointly published by PAN/Ballantine and usually list both publishers on the cover.

This week I picked up a copy of ‘The Water of the Wondrous Isles’ by William Morris that appeared to be just a Ballantine but when I opened it I found it said it was PAN/Ballantine. It is printed in the UK but has the Ballantine ISBN on the cover, is this a case of using US covers on UK  printed text blocks?

I was also really pleased to hear from James Edwin McConnell’s daughter, Ann, this week This was in response to a blog quite a while ago when I mentioned the cover for ‘Ben-Hur’ was by McConnell and Ann confirmed that her Father always signed ‘Jas’ and not James. She also mentioned there is a book coming out shortly on the work of her Father. If I find out more details I’ll mention it in a future blog plus I’ll make a page to show more of his covers.