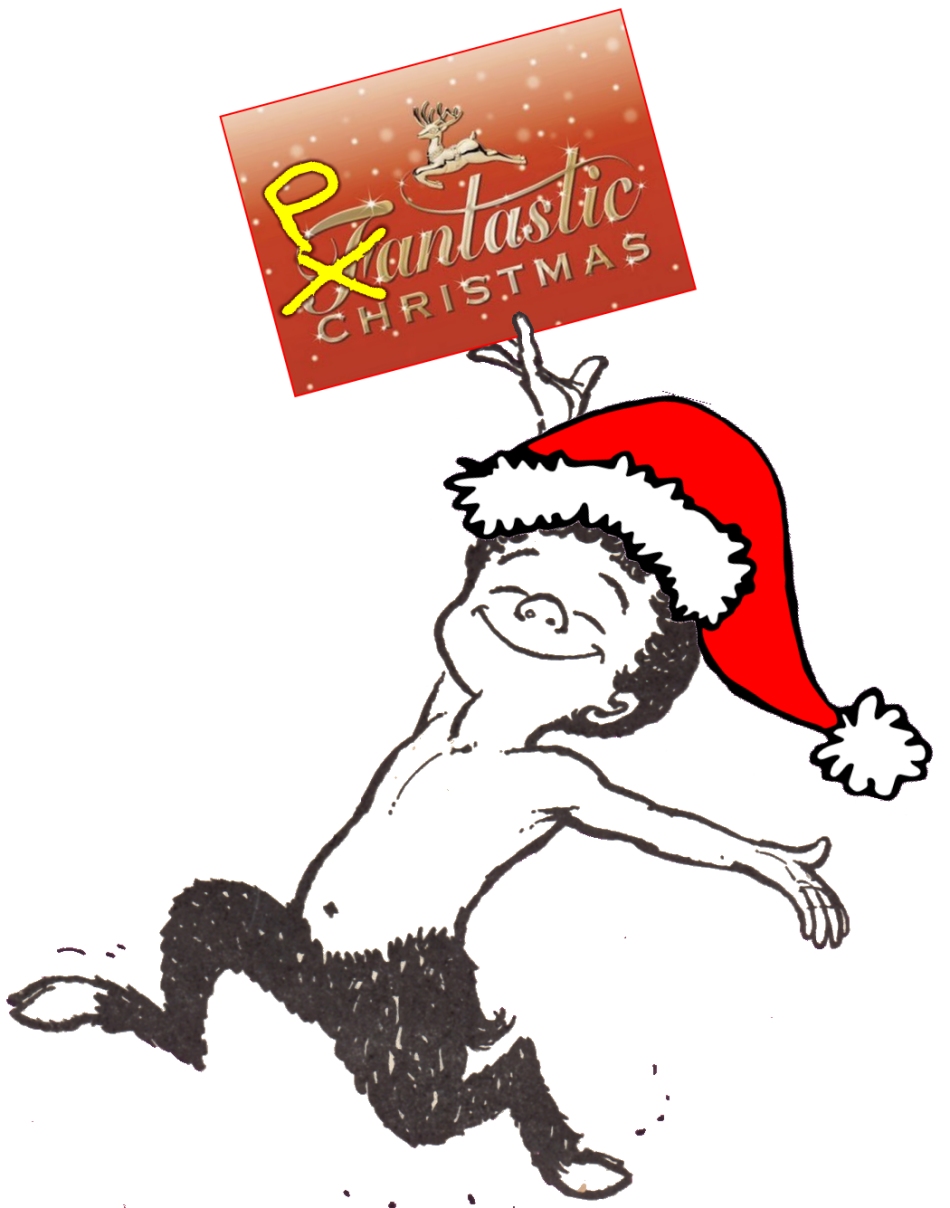 I was really pleased to get seasonal messages from two cover artists I’ve kept in touch with. I try to moderate the number of emails so risk one every six months which seems an acceptable number if I want to keep getting replies!

Thanks to George Sharp and Alan Cracknell for the seasons greetings. 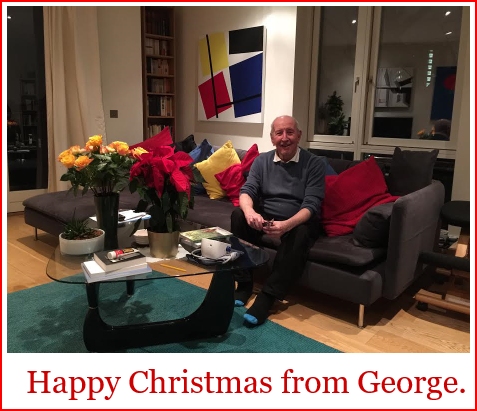 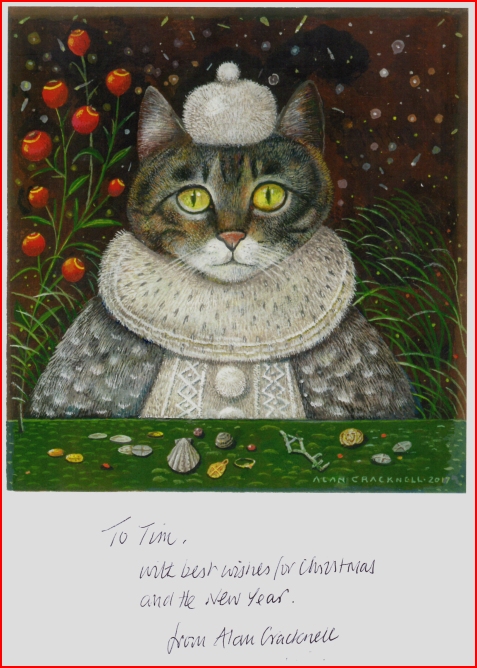 This has been blog number 315 and looking forward to many more in 2018.

Missed it again, this websites birthday on the 16th so belated greetings for its coming of age – 18 years and still going strong.
Here’s to many more blogs and postings and hopefully comments from anyone reading them.

With Christmas coming up I thought I’d share a piece of seasonal artwork by PAN cover stalwart Glenn Steward I bought off eBay for peanuts, I think it cost me more in postage than I paid for the artwork itself. He painted it as an idea for his personal card for 1995. 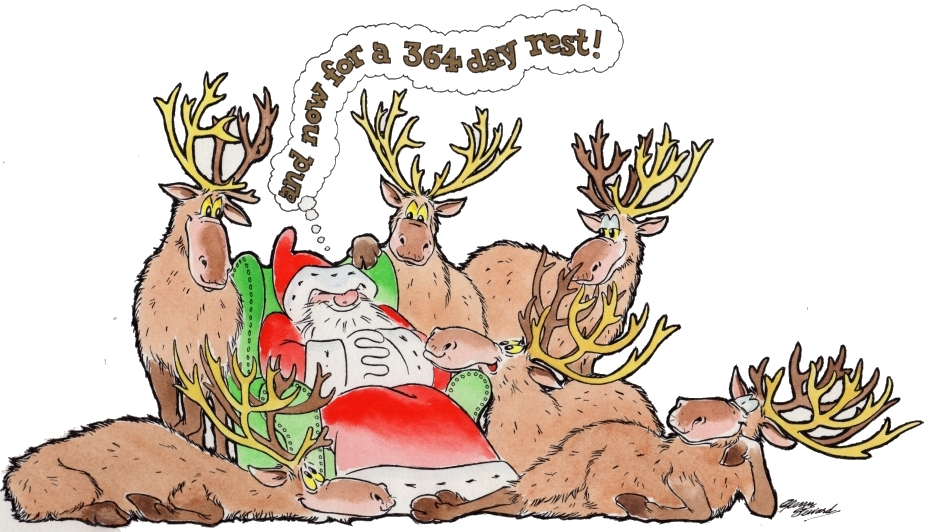 I like Glenn’s work and have a few examples including the perennial favourite ‘The PAN Book of Card Games’ used for thirty years over several editions. I also have the front and back covers of ‘That Magnificent Air Race’ and the ‘Hanging Hitchcock’ which my wife hates (I really must update a couple of those pages) 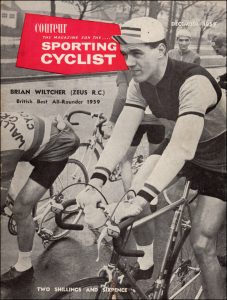 Although not that much is know about Steward he was a very keen cyclist and was art editor for ‘The Sporting Cyclist’ with a seasonal issue like this which doesn’t seem to contain any of his artwork so here are a couple of cyclist he painted for a greetings card. 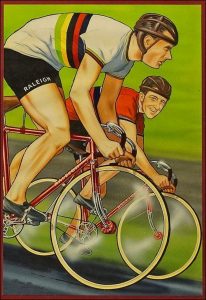 … and finally I went out for a Christmas lunch for members of ‘The Friends of Pelsall Commons’ as my wife and I are ‘Wardens of the Little Commons’ which means we do grand things like litter picks. It was at lunchtime and half a bottle of wine was beginning to take its toll but at least I’m wearing my PAN top as they said wear something red and that was all I could find – honestly! 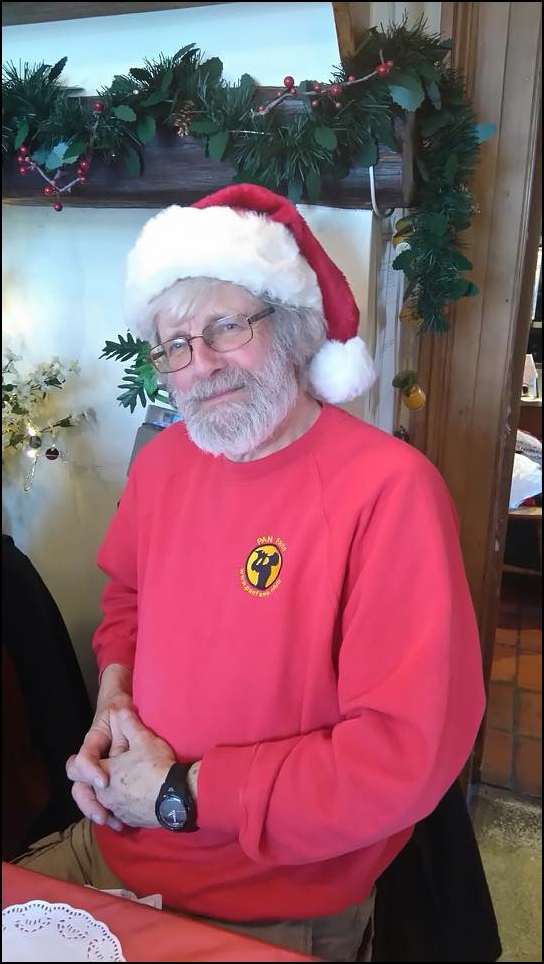 Most of the time I’m not really bothered about statistics for the site but every now and again I go onto my control panel to look for ‘spongers’, those that just link to images on my site so effectively stealing some of my usage allowance which fortunately is supposed to be ‘unlimited’ at this moment. It was while I was there I looked at visitor numbers per month which usually fluctuates between 500 and 1,500 and I’m more than happy with that as it’s shows it’s not just me that  looks at it. So I was very pleasantly surprised to see the statistics for September and October which just shows how a bit of publicity in the right place makes all the difference. Thanks PAN and your 70th anniversary media but it looks like it’s all down hill from now on, roll on the 75th. 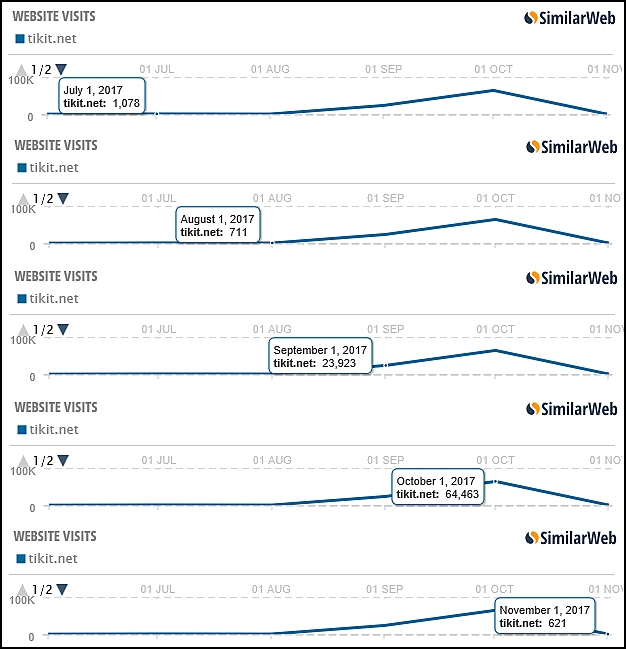 As usual we were way too early for a funeral last week so called into a charity shop where they were selling ‘Three books for a pound’ I found a couple I wanted and was happy with them but then get to the counter knowing what they’d say “You can have three you know”, “Yes but I only want these two”, “Are you sure”, “Yes”, “Really”, “YES” It was only later that I looked at them and noticed both covers were by the same artists, Chris Moore, more well know for his S/F covers than ladies legs I would have thought? 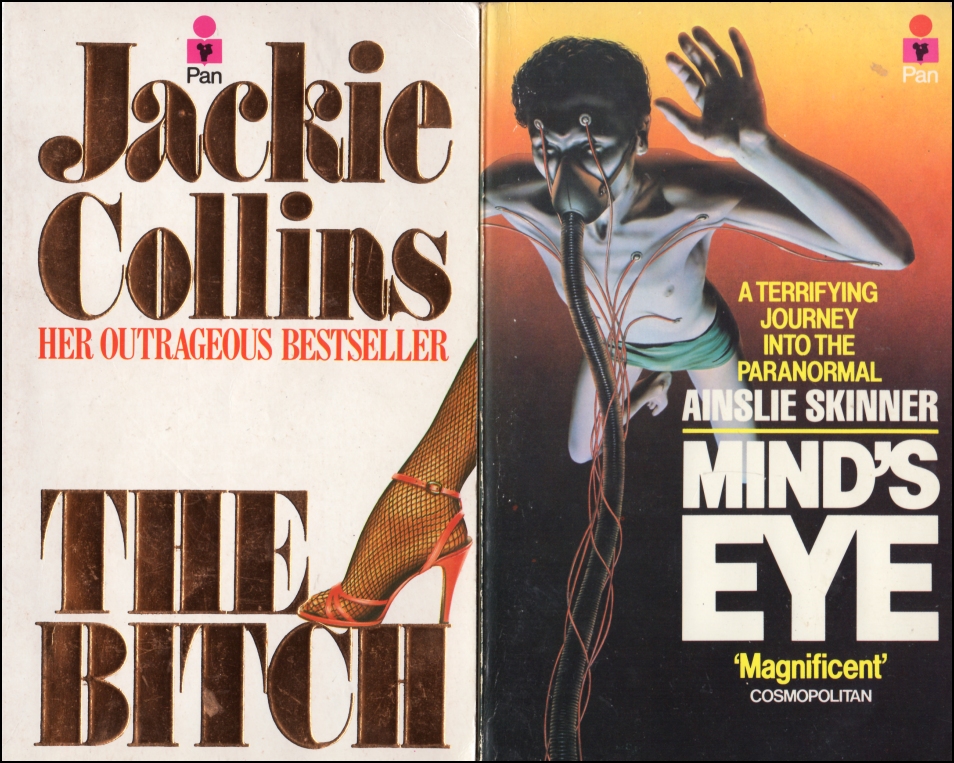 Managed to send the right image of the unicorn to Julek Heller and he has replied to say it is one of his but he’d not seen it for a long time and it could do with a clean! 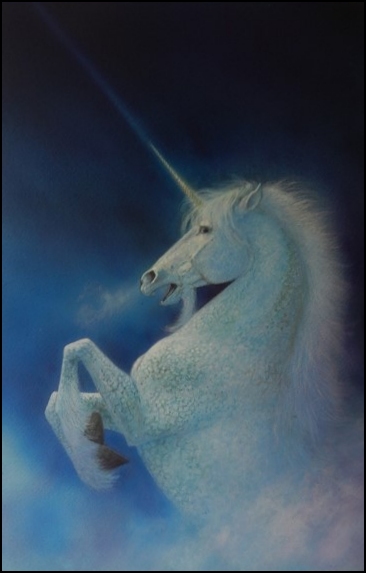 Finally, nothing to do with PAN but our campaign ‘Back The Track’ to open up an old railway line as a Greenway is really taking off and yesterday we were bought Christmas lunch and given a letter by the owners of the track to say we are now officially ‘official’ and can go on it to carry out work to make it accessible to the public. This is something we’ve been doing for a couple of years now but without anything in writing. Considering in 2014 we were told in no uncertain terms to keep off this is a result thanks to new managers at the charity who are 100% behind us.

The title for this blog is one you don’t see everyday, a comedian and a painter although they would probably say they are both artists in their own way.

I don’t often listen to the radio programme ‘Desert Island Discs’ which has been going for 75 years but did catch the end of the episode while waiting for the news where comedian Flanagan chose PAN’s ‘A Dictionary of Philosophy’ as the book he would take. He mentioned he still has it at home so I’ve fired off one of my emails asking if it’s possible to have a photo of him holding it? I’ll let you know if I get a response.This reference has now swollen the ‘PAN as mentioned on radio’ section to all of two clips which can be found HERE.

Back in August I mentioned trying to contact Julek Heller to ask about the original unsigned artwork of a unicorn to check if it was one of his and so I was really pleased to get a message from his daughter Zosia this week and letting me have contact details. We have since communicated and he confirmed that the unicorn was his but unfortunately I had sent him the wrong artwork! There were two, one we knew was his, the other something like it and guess which one I attached? I’ve since sent the other and await a verdict.

I also asked Julek about some of the titles from PAN with artwork listed as by him to which he replied “There are quite a few images out there attributed to me that I didn’t produce, some good some not ,what can you do? My website is in need of some work which I hope to deal with in the New Year . I Have a few sample covers somewhere in my files which I will try and dig out and scan. I’ll send them on to you if I can find them” I specifically mentioned the PAN ‘Gormenghast Triology’ listed as having artwork by him, which weirdly ties in with the “PAN as heard on radio” in that the only other clip refers to Mervyn Peake, author of the said novel. Julek attached his artwork for the Peake title but this was for Overlook Press in the States from 1988. 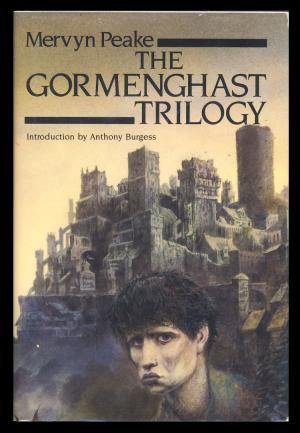 I have some more scans to add to Julek’s page but I can’t get to the box at the moment, probably in the New Year. I’ll let you know when they go on.