Always on the look out for that ‘little bit different’ cover I came across ‘Phantom’ by Thomas Tessier with a cover by Gary Blythe. featuring a couple of cut outs. I was once told by a printer that publishers didn’t like this sort of thing as it was very expensive. It must add to the production costs but ‘very expensive, any one know if that is true? Gary Blythe painted a few covers for PAN including the later Walter Macken Irish trilogy. The other PAN Tessier cover I’ve added is by Chris Moore who did many covers for them especially science fiction titles.

‘Paperbacks at War’ is the latest offering from Justin Marriott and it took me a while to realise the cover was from the PAN edition of Book 1 in the SAS series by James Allbany namely ‘Warriors Caste’ The artwork is by Paul Simmons and when talking about artists to Justin he added in his email that Jim O’Brien, who was Copy Editor, though the lead character reminded him of Oliver Tobias?  When I meet up with Paul, hopefully sometime soon, I’ll ask him.

This weeks sketches to go with Hans Helweg covers are one definate and one probably a couple of working ideas. The first is for the background to ‘The Malayan Trilogy’ by Anthony Burgess and the second ‘The Horsey Set’ by Pamela Moore.

Quick update since moaning last week about books not arriving well last Saturday one from mid February did arrive. from the States. I’ll mention it in the next blog.

Having had M184 ‘I Never Promised You a Rose Garden’ by Hannah Green on the shelf unread (by me and anyone else by the look of it) I saw there was another edition and then on further investigation found PAN published four as PAN’s and one as a ‘Pavanne’. Maybe one for the reading list ……? Her real name was Joanne Greenburg and PAN published three of her titles written under this name plus too as ‘Pavannes’

This weeks Hans Helweg artwork is for the 1966 and 1976 editions of ‘Lost Horizon’ by James Hilton which used the same artwork.  I need to go through the folders again as I seem to remember there may be some sketches of the girl and the man as well.

I wish someone could explain what is going on with the post not only here in the UK but also from Canada and the States? (Australia and NZ seem fine and very quick at the moment, I hope I’ve not spoken too soon!) It’s the inconsitency of delivery times that I don’t get. I’m trying to collect together a set of books from a particular publisher with a PAN connection based in Canada. I started back in February and am still waiting for some to arrive whereas others ordered at the beginning of June have. So far it seems to be 11 days as the quickest and 5 months and no sign……! I have contacted sellers for tracking information to be told there have been problems but give it time. It seems to be sellers that use bulk shipping as opposed to standard mail that  are the ones still outstanding. Is it really all COVID related as that seems to be reason given most often?
While I’m still moaning what is wrong with ‘Raspberry Reich’ by Wolf Mankowitz, is it cursed? I had to order it four times from four sellers before I managed to get a copy. The others never arrived and one of sellers was supposed to have sent a replacement so does that actually make it five? I just wanted to check if the cover and back matched up but not quite presumably due to trimming.

PAN published ‘The Private World of Georgette Heyer’ by Jane Aitkin Hodge in 1985. Of course the first thing I did when I got a copy was go to the index to see if PAN got a mention and it did. It was not too favourable at first but she was glad to find they listened to her apparently. Good to see Penguin doesn’t get off lightly for ‘False Colours’

The eight titles published by PAN mentioned are G570 ‘The Corinthian’, X39 ‘Regency Buck’, X64 ‘The Grand Sophy’, X70 ‘Friday’s Child’, X88 ‘An Infamous Army’, X108 ‘The Reluctant Widow’, X119 ‘These Old Shades’, X151 ‘The Conqueror’. Now to try and worked out which two are quite attractive, one very good, those poor but no problem as to which was ghastly apparently! PAN had published some titles previously but no mention of their covers, maybe I’ll include those in a later blog.

Fellow PAN Fan Jules Burt kindly contacted to ask if I had seen ‘Superstore’, season 3, episode 8 where employee Garrett McNeil, played by Colton Dunn, wears a tee shirt with a familiar image. The answer was ‘No’ but I’ve now added it to the ‘PAN As Seen On The Television’ page and to ‘checkout’ the real cover click HERE. If you’ve not see Jules’ videos you’ve missing a treat and one of his latest is looking at ‘PAN Giants Numbered X500 to X675’ If you watch the video you’ll see Jules pondering over the name of the cover artist for X509 ‘The Wrong Box’– spoiler alert, it’s Glenn Steward.

Still matching Hans Helweg sketches to go with covers and this week it’s two by Michael Sadlier namely M99 ‘Forlorn Sunset’ and M100 ‘Fanny by Gaslight’ Sadlier was born on the 25th December 1888 and died on the 13th December 1957. 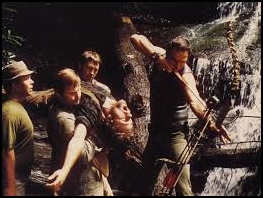 STOP PRESS Just heard on the news that Ned Thomas Beatty, born 6th July 1937, died yesterday at the age of 83.  He was in ‘Deliverance’ which I mentioned back in March. Looking for a still to check who he played it was interesting to note that he seems to have been cropped from the film tie-in cover, maybe because of that hat!

Back in 2019 I mentioned I had got a set of six James Herriot titles in a slip case from Canada. The interesting part was that they were still sealed in the plastic wrapper and I was debating whether or not to open them. Well I haven’t but luckily I spotted a similar set on eBay being sold by The Air Ambulance in this country. When they arrived I was really pleased to see they were all Canadian printings plus, and this is a rare occurrence, the edges of all volumes were green. Now there is much specualtion as to why this was done but no definitive answer but maybe it does make the cheap paper look more expensive especillaly when it starts to go brown as is suggested most often. I’ve added an update to the page so you’ll need to scoll to the bottom which can be found by clicking HERE

Peter Mayle, who was born on the 14th June 1939 and died on the 18th January 2018, was awarded a ‘Golden PAN’ (or ‘Golden PEN’ as the label on the back says!) in 1993 for selling a million copies of ‘A Year in Provence’ I have a photo of him receiving the award and have added it to the ‘Golden Pan Awards’ page. Mayle is also well know for the series oublished by PAN ‘Wicked Willie’ a humorous British cartoon character personified as a talking penis. He first appeared in the book ‘Man’s Best Friend’, published in 1984.

After deciding not to pay the asking price for a first edition of ‘Owls in the Family’ by Farley Mowat with cover by Hans Helweg on eBay in Australia I then bought several for a penny off Amazon and as luck would have it one was actually a first.