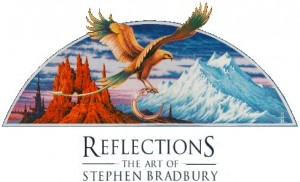 In the book “Reflections: The Art Of Stephen Bradbury” published by Paper Tiger in 1996 can be found the original artwork for the covers for “The Saga of the Exiles” series where Stephen tells of his meeting with Gary Day-Ellison and how lucky he was to get the commission as it was Friday and “Gary didn’t see anybody on a Friday” His obvious disappointment softened the secretary’s heart, he had five minutes to show his portfolio anf the rest is history as they say. After the “Exiles” covers he went on to do the four covers in the “Galactic Milieu” series, namely “Intervention”, “Jack the Bodiless”, “Diamond Mask” and “Magnificat” The eight covers are linked in that the angel in “Magnificat” metamorphoses back into the skull on the cover of “The Many Coloured Land” 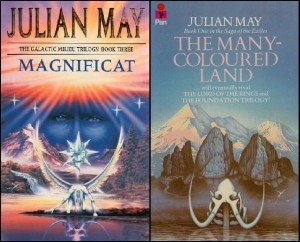 I have now added several more covers of various dates to my original Julian May PAN Books page including some of the American titles Stephen mentioned saying “If you see the American covers for the same series, they are a bit cringeworthy” Dare I say I quite like some of them especially “Adversary” from 1983. It is also interesting to see the later PAN editions from 1994 onwards where the artwork is spoilt by being squashed to fit a format for which they were not intended. 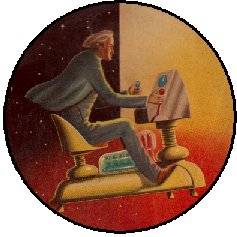 ‘The Time Machine’ by Herbert George Wells was written 120 years ago in 1895 and has never been out of print. I don’t know how many covers and variations PAN printed but I’ve put seven examples I’ve got HERE The 1953 cover is by George Woodman about whom, like a lot of the artists from the time, very little has been recorded. The 1974 cover is by Ian Miller and the 1976 by Alan Lee of which a lot has been written about them both.

Here are a some recent updates for a few pages;

Rowan Barnes-Murphy was mentioned in a blog regarding the Breakthrough language series and since then I have tracked down and scanned in another four of his covers and one where he did the illustrations to .

I found  another cover for ‘The Scapegoat’ from the Daphne du Maurier series, ordered it and yet again it is not the one shown so I’ve used the sellers photo while I try and track down the one I actually wanted. I’ve also included a photo of an item I found on eBay, a book and letter signed by du Maurier. I place a bid but in the end it went for £137, well over my limit.

I’ve added a couple more covers to the ‘Piccolo Adventure Library’ with artwork by author and artist Tom Barling. These are both signed ‘T.B.78:’

Finally after many years I’ve found copies of  book 1 and  3 to go with 2 and 4 of the “Fun With Words” series  I already had. It is one of those mysterious occurrences when I can’t  find any for years and then both the ones I need come along at the same time – and at a price I’m willing to pay. Someone is asking £35 for book 4!

Between 1982 and 1984 PAN printed the four titles in the Julian May “Saga of the Exiles“ series namely “The Many Coloured Land”, “The Golden Torc”, The Non-Born King” and “The Adversary”. They all had covers in a similar style by the artist Stephen Bradbury. If you put the covers side by side you’ll find that the images do not quite join together whereas on the outside of the 1983 (first 3 titles) and 1984 (all 4 titles) boxed sets they do which prompted me to contact Stephen Bradbury and he kindly replied and said 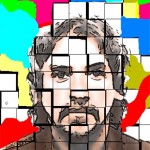 Hi Tim, Thanks for your email.
The answer to your question is, the artworks were painted separately over a period of years. Gary (Day-Ellison) and I basically decided to keep the central horizon about the same level with each painting. We knew it was going to be a series, so we developed a ‘series look’ to the jackets from day one. The overall use of slightly different blue colours was a conscious thing. The success of the series blew us away, so I think by book 3, “The Non-Born King”, the marketing department decided to photographically merge the artworks. They were initially used this way on large billboards and giant posters, which I have copies of. The same trick was used when book 4 “The Adversary” came out. The large billboards looked quite dramatic. Each Julian May book got high in to the top ten , in the book charts. It was a great success for Gary, myself and Pan Books.

This was followed by “Intervention”, “Jack the Bodiless”, “Diamond Mask” and “Magnificat” They were a few years later, and I decided use faces of the characters in the sky. I knew the pages of the last book, “Magnificat” go right back to the beginning of “The Many Coloured Land”, so I contrived to get the artwork to do the same trick ! Overall, I tied to keep the artwork for the series quite elusive ! To draw people in, but not give anything away about the stories. It seemed to work. Intervention, is just that ! An eagle flying along , suddenly is intervened with. An intervention, unlooked for. I did this with all the covers  Quite surreal, and quite sophisticated , for the time.

If you see the American covers for the same series, they are a bit cringeworthy. Gary and I really did create a magical format. I have the boxed set , you mentioned, and yes, they were linked by photographic means. The Many Coloured Land was my first book cover, and I will always be eternally grateful to Gary for giving me my first book  cover  and my first break in to illustration and publishing. I wouldn’t be here now, if it wasn’t for Gary.. He has great insight.

I hope that answers your question Tim. Use my email address to contact me.

I greatly admire Stephen’s work and will be adding more covers in the next few weeks. From reading reviews the books were very well received but from the excellent condition of both of my boxed sets these books appear to have never been removed!

Following on from the blog referring to the PAN “Spotlight on Languages” series they also carried on the “Breakthrough Languages” series first published by Macmillan, then taken over by PAN and eventually going back to Macmillan. They were sold as a package containing a book and originally cassettes, later replaced with CD’s and the page shows two covers for some of the languages, I’m still trying to find the missing few, and I’m just guessing that the covers by Rowan Barnes-Murphy are later as the contents are identical. 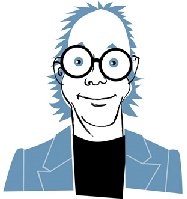 My apologies for not getting back to you sooner and would have been very happy to have met you on your last visit to this area but I recall things were very hectic at the time ….renovating a small cottage whilst living in it and working at the same time. Very demanding. I’ll have a look around and see what books I’ve got.  I usually keep copies of everything I’ve done. I’ll get some scans over to you.  This will take a little while as I’m again very occupied with work at present. I met Val Biro and his wonderful car at a school once where he was story telling and I was the ‘drawer’. He was charming and great company for the day.
Love your website by the way!
Brilliant!
I’ll be in touch.
Best wishes
Rowan

Following on from my reference to how the painting for “Testament” by George Sharp was turned upside down I also found the same image used by Chatto and Windus for their hardback edition. The gun is again shown in yet another position to the original and George tells me he didn’t get paid for this edition! “First Blood” from 1973 has a cover in a very similar style but George says it is not his and I can’t find a name as yet. 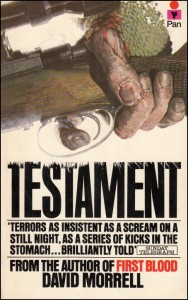 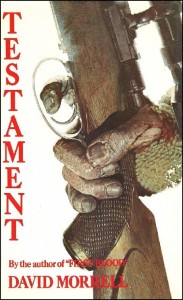 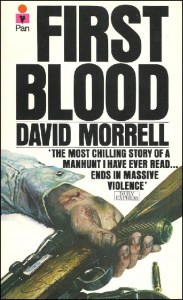 I often wonder if it was the case with other covers that artists didn’t get paid twice especially ones like the Shute series from 1974 by Roger Coleman when they were used in the USA by Ballantine with whom PAN, I think, had a link through Ian and Betty Ballantine (Ian Ballantine was connected with Penguin in the late 40’s but there was a falling out) 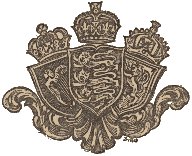 Another series where the same covers appeared on the UK and USA editions are titles by Jean Plaidy used by PAN in the 60/70’s and by Putnams in the 70’s. I’ve put a few HERE. I can find no reference to a cover artist for PAN editions so I bought the hardback Putnam edition of ‘Murder Most Royal’ as US publisher usually credit the artist but unfortunately not in this case. Does anyone know who he/she/they might be? The shield above appears on the title page of the PAN Plaidy “Stuart Series” and is by the late PAN cover stalwart Val Biro.