Tried to attempt the annual ‘throw out’ and failed due to always finding something that causes a distraction. This time it was a large pile of Reader’s Digest Condensed Books we have acquired over the years from friends and relatives who would otherwise have put them in a bin. I picked one up and was immediately hooked by the fact the artwork for one story was by Brian Sanders, a popular PAN book cover artist as  featured on the website. Investigating further I found George Sharp, Roger Coleman, Michael Johnson and Alan Lee. My wife spotted a mention of ‘JAWS 2’ being shortly published by PAN that made me start looking at other covers and who painted them. I can’t find a name for ‘JAWS’ but the Roger Kastel movie poster was used for later editions as was the Lou Feck poster for ‘JAWS 2’  Ken Hatherley, studio manager at PAN in the 70’s still doesn’t get the credit for the iconic JAWS teeth he designed!

We went to see ‘JAWS’ at the cinema the day it came out, queuing for ages and then being the last ones allowed in. No seats left so we had to stand at the back but how we all jumped when that face appeared at the boat window ……..!

One seller currently has three 1st edition 2nd printing copies of ‘Casino Royale’ on eBay UK at the moment, plus a very poor copy of ‘Moonraker’, I shall be watching!

Having come across Greek James Bond titles with a distinctive PAN flavour I have now found a site showing nearly a dozen Indonesian variations on PAN Ian Fleming covers. They are on a blog by Tokohitam called Black Chamber plus I found a few more on other sites. I’ve put them together below as a slide show. If anyone has any spare copies I’d certainly be interested.

OK
I used Google translate on the titles and got some very strange (and amusing) results. I also noticed that a John Creasey had become a Bond (OHMSS) as below and I have to admit I do quite like ‘Thrilling Cities 2’ in red. 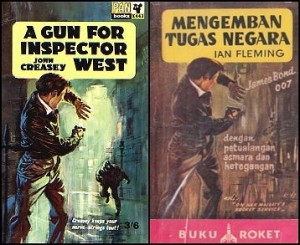 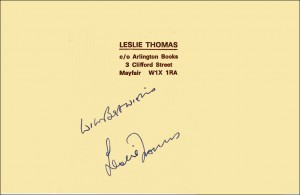 Following an email from Jem I was reminded that we had not only lost Sam Peffer this year but another  PAN stalwarts , Leslie Thomas, winner of a Golden PAN Award for selling over a million copies of ‘The Virgin Soldiers’ 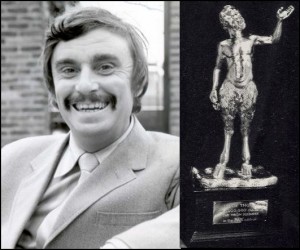 Back in May  I started to put together a page of covers and had not realised how many variations there are on his dozen or so titles published by PAN. So while I track them down I’ve adding a slide show of the 11 comic covers from the 80’s. As usual if you know of any more that I’ve missed please let me know.

{image.index}/{image.total}
This jQuery slider was created with the free EasyRotator for WordPress plugin from DWUser.com.

OK
PS Silly prices time on eBay UK again where a copy of the Domino letter from ‘Thunderball’ sold for £321.11 after 26 bids (and no free postage!)

As I mentioned last month my wife and I were made very welcome at Henry Ling Printers in Dorchester when I approached them about their involvement in printing the ‘Invisible Ink Puzzle Books’ under the Piccolo imprint in the 1980’s. Click on the photo below to see how we got on.

The delay in this blog was while I tried to find something on the other uses of invisible ink that got mentioned but all came to a dead end so if anyone out there can help ………….?