As I’m sure every ardent PAN collector knows there was a collaboration between PAN and Harlequin in Canada in the 1950’s I thought there were only eleven titles they jointly published but on looking at the excellent ‘Fly-by-Night’ website I see there is possibly a twelfth but it could be a mistake. It states “There isn’t a Son of the Gods Pan edition. Son of the Gods is also unique in that the phrase “A Harlequin-Pan Book” is not on the front cover and no notice of the arrangement with Pan on the copyright page as there is with the other 11 books. I suspect that the variant of Son of the Gods with the Harlequin-Pan notice on the back cover is an error. The Lost World is 238, Son of the Gods 241. Covers with the preprinted phrase used for The Lost World may have been inadvertently used for Son of the Gods before the error was caught” Just wondering if anyone has a spare copy of this book that I could add to my collection? 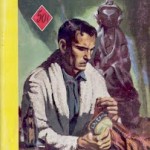 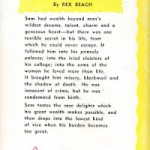 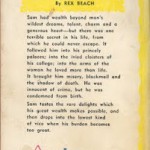 This blog is about a great piece of ephemera namely the  original contract between John Burke and Clarence Padget (Director on behalf of PAN) for him to write and for them to publish the book to accompany the film of “The Man Who Finally Died” I’ve added the contract to the page for G614 and also included the original cover artwork by Sam ‘PEFF’ Peffer who signed my copy of the book. Clarence Padget, on Herbert Van Thal’s death, edited the PAN Book Of Horror Stories series from volume twenty-six until its demise with volume thirty in 1989.

While having another look through a DVD of over 500 pieces of original PAN Books cover artwork I noticed something I’d not noticed before. G558, written by Pearl S Buck, was published with the title “The Devil Never Sleeps”  but is shown as “The Virgin Of Kwangtung” with the same artwork by Pat Owen. Does anyone know where this alternative title came from as I’ve not managed to track it down so far? 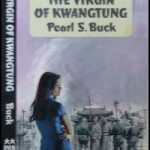 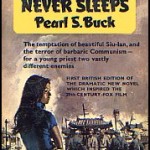 I will be adding further scans from the DVD over the next few months. I’ll list them on the blog to highlight where they are such as this one – The Thirty-Nine Steps

While sorting through some PAN related bits and pieces I came across the last will and testament of Ralph Holmes Vernon-Hunt (as you do) in which he leaves all to his wife or in the event of his wife predeceasing him, his children. Included with this was the letter to the right on PAN Books headed notepaper because at the time he was Sales Director who later became the Managing Director but he is more famous for another reason.

He was the model for the James Bond found on the covers of several titles from the early 1960’s. He even appears on one cover when he shouldn’t! Click here to find out which one has the mistake.

Finally I was out walking a long distance footpath over the last couple of days some of which included the towpath of the Staffs and Worcs Canal. One of the moored narrow boats had a couple of boxes of paperbacks  by it. They were 10p each and in one was, at a quick look, a complete set of James Bond PANs from the 60’s. I was very tempted but as I was only 15 miles into the 41 I had to cover I regrettably decided not to this time which was probably a sensible decision. 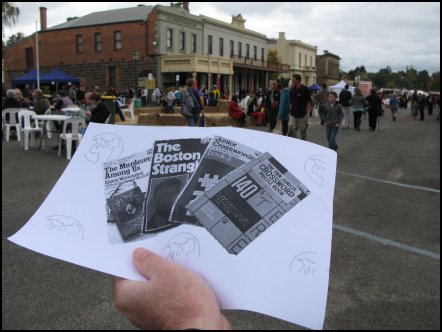 Bazeer Flumore sent me the following photographs after he visited a bookfair in Clunes, Australia. Clunes has just become the first  Australia booktown so I hope if does better than Atherstone booktown here in the UK which seems to be no more. Bazeer runs the excellent Piz Gloria website for those aficionados of James Bond book covers and while he was looking to enlarge his collection he was also looking for my last three wants but I think failed on both counts.

Here are a few photos of what we missed including a few of those boxes we love to look through hoping to find that one title the dealer missed but ………. 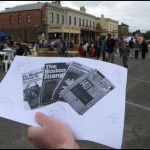 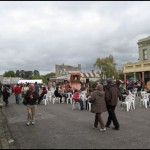 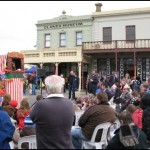 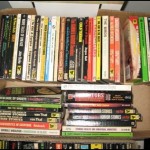 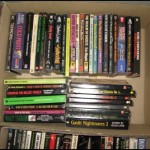 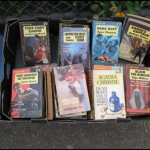 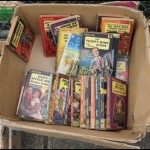 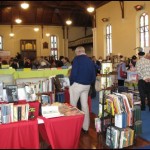 I was just adding the 1970 edition of ‘The Young Lions’ today and cross referencing it with the other editions when I realised PAN had given this title 3 numbers over the years namely X11, M3 and E21. This started me trying to work out which title was published under the most different numbers. So far ‘The Young Lions’ wins but I’m sure there must be others. I’m going to add 1974 edition just for completeness to the series – when I can find it!

I was very pleased to see I was getting a lot of comments until I realised they were all the posting equivalent of spam. If you have sent a comment and its not appeared please send again and start it with something like ‘This is not Spam’ and I can edit the comment to remove it before approving.