This week I’m including a few covers I’ve meant to mention for a while.

The  first is the recycling of the Josh Kirby cover which originally appeared on the front cover of ‘The 13th PAN Book of Horror Stories’ and turned up again 7 years later on the from cover of ‘Der Wolfsmensch’ from Pable in Germany. Have any of the other PAN horror covers appeared on books by other publishers?

On a group on Facebook there was a mention of an auction including an odd variation on a PAN cover for ‘Live and Let Die’ A couple of us asked which auction as we couldn’t find it but didn’t get a response from the poster. Maybe they wanted to keep it to themselves? Anyway here it is below, possibly Taiwanese but it doesn’t look like any I’ve seen before. 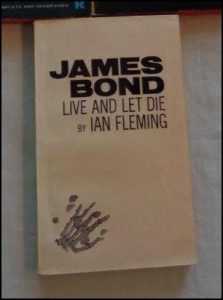 I was looking at James Herriot covers when I noticed on an Australian booksellers site a variation on a cover I’d not spotted before. As the postage asked was astronomical I looked for it on UK sites and managed to get a copy. I’m now left puzzling if there is a third variant in Australia or it was just a bad photo where there is not pink on the cover. 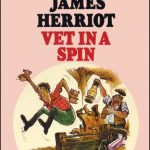 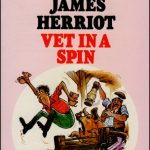 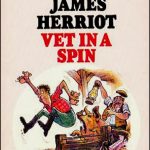 Talking of postage I always find this to be a mystery. I wanted a boxed set of six Herriot titles from Canada. Postage was quoted at $10 but when I ordered them I was asked for the same again to cover the ‘extra’ cost so how come I could get all 16 Jalna titles posted to me for $8.50 and I checked to confirm that would be the price?

Finally I’m used to Gmail offering me wonderful deals on items I’ve just searched for but for it now to get personal and decide after reading my emails they are Spam is a bit much. Someone I’ve emailed on and off for a long time apologised for not getting back to me recently as that’s where he eventually found my last communication!

Last week I mentioned I thought I’d found the artist who did at least 12 covers for Leslie Thomas titles, well I had and Paul Davies kindly emailed back;

It was indeed me, I have not seen these for many years and the artwork is ‘no more’. I think I probably binned it some years ago.
For your information the covers were designed by Gary Day Elison, Pan’s then art director and at the time I was working more as a visualiser than an illustrator/cartoonist ( I prefer cartoonist as we take ourselves a little less seriously ) Gary asked me to visualise a book called ” That old gang of mine” by Leslie Thomas which was due to be a photograph in the final version. Leslie Thomas liked the visual so much he asked for me to do all his books. I can’t for the life of me reason why as I think the drawings are awful, the best one being the first one, but they go down hill from there! I like to think that I’ve improved since.

People ask if artists ever read the books that they illustrate the jackets for, well in this instance my wife read them for me and picked out the best bits for me to illustrate! On “Come to the War” I was asked to drop in a bra, so decided to patch it in on the piano. I did protest at the time and said that there was no sex in this book and it was not relevant…which made a change for Leslie Thomas’s books. But they insisted.

The books were the sort of start to my illustration career, and the credibility it gave me was a great help to me, so I have much to thank them for. However as you will gather from my thoughts on them, they were not a high point personally! I’ve drawn better since and before.

I’ve had a quick look at the site and found it very interesting with some very familiar names there, and some incredibly talented artists, which is why I refer to myself as a cartoonist! This despite being in those days the Chairman of the Association of Illustrators for two years with a lot of involvement from Brian Sanders. I’m not quite sure how I ever got voted in, perhaps being a bit mouthy helped.

For your information I made a living from drawing for 30 years then got a new career aged 58 when I got what my Mum would have called a proper job, working as a print rep for a local Gloucester company. I’m retired from there and have gone back to the drawing board. Unlike proper jobs drawing is something one does not retire from, but I’m sure you know that.

PS If you put the drawings on the site, please tell everyone that I have improved and point them to my website www.pauldaviescartoons.co.uk“ 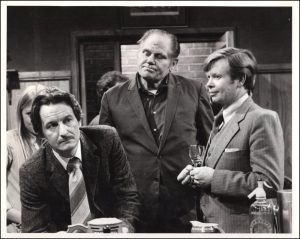 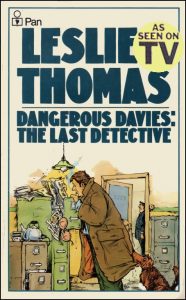 I have also acquired the photo above that shows a scene from the ill fated TV series “Tropic” based on the “Tropic of Ruislip” book showing Ronald Pickup, John Alderson and Ronald Lacey.

I found PAN had a sticker printed to cover over the original circle on the cover of  ‘Dangerous Davies – The Last Detective’ to plug the TV series. I’ve not managed to find a copy so the image is off a website I found once – thanks to whoever put it on.

Finally I am hoping to speak to Paul Davies on the phone this week so may be able to add more later. 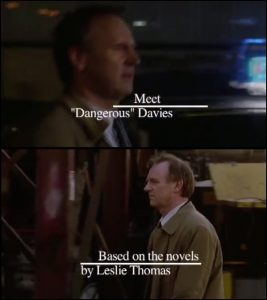 No luck contacting Paul Davies yet but click HERE if you want to see the 12 covers I found so far that he did for Leslie Thomas titles in 1979. Were there editions in the same style for ‘Stand Up Virgin Soldiers’, Arthur McCann and All His Women’ and ‘This Time Next Week’? After mentioning ‘Tropic of Ruislip’ which became the TV programme ‘Tropic’ that proved to be a bit of a failure I didn’t realise there was also a TV series called ‘The Last Detective’ based on the ‘Dangerous Davies’ book. It was certainly more successful than ‘Tropic’ running for 17 episodes in 4 series’ from 2003 to 2007. The only reason I found it was while looking for something better to watch that ‘Eurovision’ I came across ‘The Last Detective’ being rerun on the ‘DRAMA’ channel. I watch a bit but ended up switching back to ‘Eurovision’ but not sure why as that’s nearly four hours of my life I’ll never get back!

Still hunting down the last couple of Jack Higgins covers and managed to find ‘The Eagle Has Landed’ but it could be yet another variation as I though the edition I wanted  would be 1991 while this one was 1985. Just ‘Storm Warning’ from around 1990 to go possibly!

STOP PRESS: Just found a site that might be for Paul Davies. Here is a drawing from his website of his idea of a Book Shop Owner which is very much like the PAN covers in style. 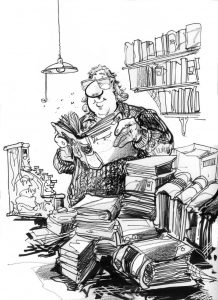 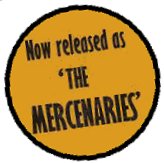 I recently picked up a copy of the film tie-in edition of ‘The Dark of the Sun’ by Wilbur Smith because it had on its cover a sticker to promote the film. What I am left wondering about is why the title was changed for the UK ? The word ‘The’ was dropped from the US version but changed completely to ‘The Mercenaries’ over here. The same artwork by Frank McCarthy was used for both versions of the poster.

It was while I was sorting out my Leslie Thomas titles with covers by artist Paul Davies (are you out there Paul as I’ve not tracked you down yet?) that I noticed one of the other editions mentioned that ‘Tropic of Ruislip’ was quote “Now a hilarious ATV network series” which of course needed checking out. Apparently it was a complete flop and luckily the ATV network had a strike at the same time in 1979 and the series just slipped away into oblivion. 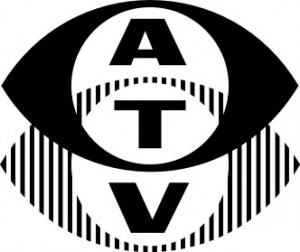 The Paul Davies series of Leslie Thomas covers will appear next week or as many as I’ve managed to find so far.

Spent last Saturday at Waddesdon Manor, a completely over the top ‘chateaux’ built by Baron Ferdinand de Rothschild as a weekend retreat but really disappointed as not a PAN book in sight to add to my ‘As seen in National Trust properties’ page. Not even a second-hand book shop!

To finish here is a photo of Leslie Thomas taken in Edinburgh in February 1971 where he is shown with three of his titles in PAN editions namely ‘Some Lovely Islands’, ‘The Love Beach’ and ‘The Virgin Soldiers’ 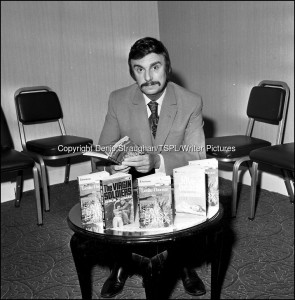 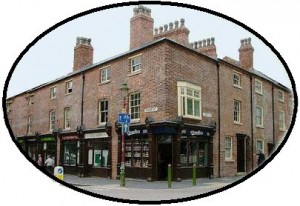 We have just come back from spending a few days being tourists in Birmingham. Although almost on our doorstep we’ve never really appreciated how much it has to offer. We stayed in one of the last remaining examples of ‘Back to Backs’ in the country, not one open to the public I hasten to add. It was a three storey Victorian ‘cottage’ (the middle block on the right in the photo above) It made us appreciate how hard life was for them back then, the Wi-Fi was so slow, awful TV signal and the en-suite was really tiny but on the plus side it was in the Chinese quarter so great choice of restaurants and The Hippodrome theatre was literally across the road so we went to see ‘Let It Be’ a tribute to the Beatles. We went on a tour of the other houses open to visitors and was pleased to see in the tailors shop a PAN title and so have been able to add to my pages of ‘PAN as seen in a National Trust property’ 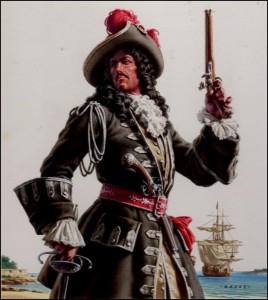 A few books arrived while we were away including a copy of ‘The Fortunes of Captain Blood‘ which I had felt sorry for as it got relisted so many times on eBay I thought I’d put it out of its misery BUT on closer inspection I noticed it was the first copy of this title I’ve seen that had been trimmed in such a way as to actually show half of the name of the cover artist. I already knew who the artist was as I have the original artwork plus another in the series both clearly signed. 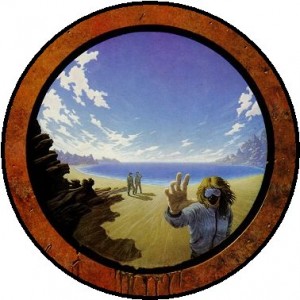 Still helping Colin Larkin track down his unknown covers both for title and artist and managed to find them for ‘Where Time Winds Blow’ by Robert Holdstock.with a cover by Michael van Houten. Michael emailed “It is indeed one of mine. One of the very earliest covers I made. I’d forgotten about it in fact, though I remember creating the weathered surface was the most enjoyable aspect, I think I’ve still got it buried in my studio somewhere”

…. and finally I managed to pick up a copy of ‘Exocet’ by Jack Higgins from 1993. The scan I had on the page was from the tiny thumbnails found inside the cover of another title so I wasn’t sure it actually existed. Only ‘Storm Warning’ and ‘The Eagle Has Landed’ from the same date to find now.