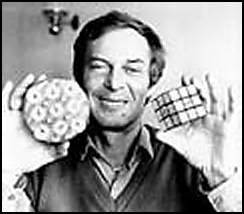 Erno Rubik first came up with the idea of his ‘Cube’ in 1974 but it didn’t really take off until 1981 when it won several international toy awards. Suddenly everyone was cashing in on its popularity by publishing books on how to solve it. PAN, to be different, published their ‘Not Another Cube Book’ in 1981which was also published by Ballantine in the States at the same time.

Rubik later went on to develop his ‘Snake’, his ‘Tangle’, his ‘360’, his ‘Magic’ and his ‘Clock’ As far as I can see PAN ignored the first four but did publish the authorized edition of ‘Rubik’s Clock – A Quick Solution’ by Angus Lavery. This is a very thin publication, in fact I thought the padded envelope it arrived in was empty, which was another PAN printed in Australia in 1988 by The Book Printer, Maryborough, Victoria. I presume The Book Printer is part of the McPherson’s Printing Group as they share an address and say on their site:

“……. now, more than 60 years later, that same company is the leading book printer in Australia, with big names like Penguin, Pan Macmillan, Allen & Unwin, CCH, Scholastic and Harlequin among its many loyal clients”

Hopefully someone ‘down under’ can confirm this – Bill?

…. and finally if you want an instant collection  of PAN books here’s one Bazaar Fullmore spotted. I’ve scrutinised it very closely and can’t spot anything I’m after so feel free to bid.

I was speaking to artist Michael Johnson on the phone last Wednesday when he mentioned that sadly Gino D’Achille had died on the Friday before. Gino had been suffering with Parkinson’s which meant he was unable to do what he loved best, painting. but could still sketch according to his daughter Simona when we last contacted back in 2013. The following is from his website; 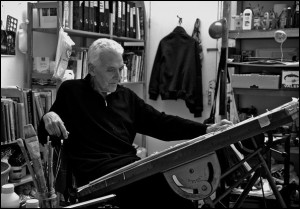 Gino D’Achille was born in Rome in 1935 and displayed a precocious talent as an artist from a very young age – being invited at 11 years old to present a portrait he’d made of Pope Pius XII to the pontiff himself. From 13 he studied at Rome’s Liceo Artistico, going on to the University of Architecture at 19. By now, he was already drawn to the world of commercial art, producing advertising illustrations for the prestigious agency Studio Favalli in his spare time. This led him to pursue a full-time career in Milan, where he gained the attention of British scouts, and in 1964 Gino was persuaded to move to London. Here, he immediately established his credentials with his illustrations for David Kossof’s popular Bible Stories, commissioned by WM Collins.

His international reputation gained hold with his 1973 paintings for the John Carter of Mars series by Edgar Rice Burroughs, going on to create over 100 cover paintings for other science-fiction titles published by Daw Books, Ace, Ballantine and various other publishers. He is also well known for his series of covers for the much-loved Flashman series of novels by George Macdonald Fraser, as well as countless western adventure stories, crime thriller and war stories, romance novels and children’s books.

Gino lived in London and Corsica with his wife, painter Mim Hain.

Gino painted many covers for PAN and here are a couple of links to pages showing some examples I’ve featured before. I will make up a section soon to try and include as many examples as I can find and put them all in one place.

Here is the link to his HART covers and another to the du Maurier page with several of his covers. 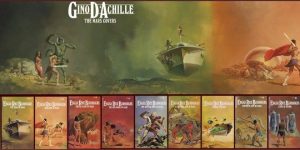 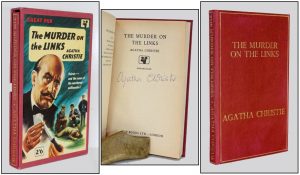 Spotted this on Abebooks and was tempted for all of three seconds until I saw the price but then again I don’t suppose Agatha signed that many paperbacks. It’s definitely a classier rebinding than a lot I’ve seen and apparently the book originally belonged to Mary Anna Marten OBE (1929 – 2010) and was purchased via auction. It was part of a lot of Thirty Five signed Agatha Christie books bound together in seven volumes. These have now been split and re-bound into separate individual volumes. All books were signed by Agatha Christie sometime in the late sixties. This slim volume can be yours for just £575 plus £3.95 postage. Below are a few more with different publishers from the same seller, Lasting Words Ltd. and with prices ranging from £425 to the PAN as the most expensive. 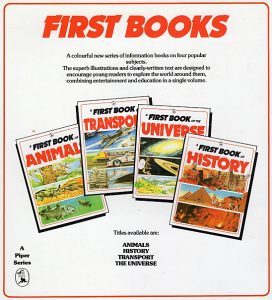 This is a bit confusing as the four titles as above are listed as a Piper series but with the Piccolo logo while inside it says ‘First published by Piper Ltd in 1984 and distributed under the Piccolo imprint by PAN Books Ltd’  Click HERE to see the four covers.

The imprints and their logos are usually to be found as in the two examples above of  ‘Gangsters, Ghosts and Dragonflies’ with covers by Terry Oakes (next blog) from 1983 and 1993.

Now winter is behind us (!) it’s time to start thinking about summer holidays and jetting off to foreign parts. I’ve mentioned the ‘Travellers’ language books before now but here are a couple of titles to help you avoid the pitfalls of overseas travel both before you go, while in transit and when you get there. They are by Brian Moynahan and I can understand the changing of the one title to make its content clearer but I wish they’d have given it a more inspiring cover. 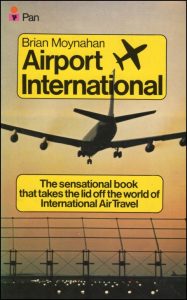 While sorting I noticed I’d got three copies of ‘A Married Man’ by Piers Paul Read all with covers I find very uninspiring and whilst looking on the net found another, a first printing from 1981 but can I find a copy that doesn’t say ‘Stock Photo’ under it? Not sure it’s worth just buying on spec. What I found more interesting is that two of the editions are under PAN’s Pavanne imprint and the TV tie-in definitely says Pavanne on the cover and 1982 inside but in the 1986 reprint edition it says ‘First published in Pavanne in 1983’ No wonder there are so many error with dating if they are using old text blocks. 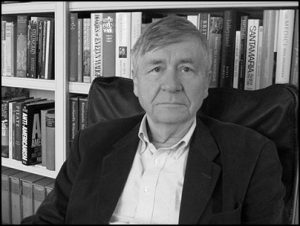 Pavanne was introduced by PAN to showcase the best of UK fiction while Picador was to include the best of international fiction.

Finally last week I included a picture of the ‘Laloun’ in Paris. It was moored at the Quai de Austerlitz in 1947 and the quai is still recognisable today. 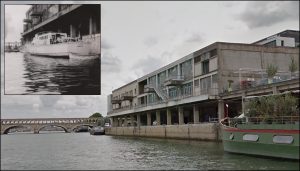