I hope you all managed to have a sort of festive time in spite of the current restrictions and got a lot of the presents you were expecting? I recently couldn’t resist 36 small artworks by Glenn Steward to go with two ‘Camberwick Green’ titles and thanks to my wife being the generous lady she is, she bought me 40 custom made frames as my Christmas present. They needed to be made to measure as there was nothing their size readily available. I have to admit they  do look good and replaced several frames of postcards of pulp covers with dubious images maybe not suitable for our Grandson to ask about if he is ever allowed to come up here! Glenn Steward did many covers for PAN of which I have a few but don’t really know much about him so if any relatives are out there I’d love to add at least one photo of him.

Now going through the folders of sketches from Hans Helweg and there are some real ‘crackers’ to use a festive metaphor. I’ll be adding them to the book covers and artwork if I have it and put up a link on here to make it easier to find. There are also some that look familiar but just can’t quite bring it to mind such as this example. Can any one help?

One disappointment was the supposedly six book boxed set of PAN Books Sherlock Holmes titles I found online in the States. The webpage said it was this, when it arrived the label on the package said it was this as did the invoice so how come it was just one hardback copy of ‘Memoirs’ from Reader’s Digest, no connection to PAN at all? I should have know as fellow PAN Fan Stuart Radmore emailed to say he didn’t think PAN published ‘Casebook’ or ‘Memoirs’ as did Alysoun at PAN but we held out the hope that they might be Canadian editions but unfortunately not. On the plus side Stuart gave me the names of all artists for the covers PAN did publish plus I did get my money back, no quibble but I would rather have had what I thought I had ordered. It makes me wonder if this box set did actually exist at one time.

What a year it has been! I’d like to say not being able to get out and visit places has saved a bit of money but I think I’ve actually spent more stuck in front of the computer searching online. On the plus side I have been in contact with some very interesting people who are trying to keep themselves safe as well and are hoping, like me, for the vaccine in the New Year.

This weeks Hans Helweg artwork is for ‘Rogue Roman’ by Lance Horner. Just looking at it through the overlay which has really gone brown you don’t appreciate the how vivid the colours have stayed over the last fifty years. I have also been lucky enough to get a preliminary sketch and possible alternative cover which I’ve put on the page.

I recently got a unread boxed set of Judy Blume titles in Piccolo editions with most of the covers by artist Yvonne Gilbert. Click HERE to see them. I emailed Yvonne and she very kindly replied “Nice to meet you! Wow! Thank you. How on earth did you find them? My goodness—that was so long ago. I don’t know if I’d even recognise them these days. I vaguely remember them and you’re probably right about the date. The artwork probably never came back to me because most of it didn’t in those days—there’s certainly no trace of it now. The 3 titles sound somewhat familiar but it was pre-computer days so I have no record. You have reminded me how much has changed—posting artwork, having to take photographic slides, never seeing the artwork again! I feel bad that I can’t be more helpful Tim. I had a look at your site—I love those pulp fiction covers. I would love to have had some of that artwork!”

I’m pleased to announce that this website has come of age being 21 years old on the 16th December. When I set it up back in 1999 it was cutting edge with frames, a higher than usual resolution and search etc. but time has moved on and every year I say I will update it BUT every year I manage to find ‘new’ old bits and pieces to distract me so the update gets put on hold. On the plus side a lot of the covers are now at a much higher resolution and size as I tend to rescan if I mention them in a blog but on the negative side it’s a really boring job! Maybe the update will never happen as I am a firm believer in if it ain’t broken then don’t fix it, it’s just a bit clunky and showing it’s age, rather like me.  Anyway here’s a joke from the latest edition of ‘Private Eye’ which amused me as it is pertinent in the trying times.

After trying for many years I’ve managed to obtain, thanks to Sam Peffer’s niece Kathy, two videos relating to the infamous Bonhams auction of ‘Original Paperback Cover Artwork from the PAN Archives’ held of 15th October 1991. They are self explanatory so I’ll just put the two links to ‘YouTube’ where I uploaded them for everyone to find.

Thames News Report from on the Day

I captured this screen shot of the artist outside Bonhams but there is still one I have not managed to identify.

They are from left to right Rex Archer, Hans Helweg, Sam Peffer, ?, Edward Mortelmans and Pat Owen. Anyone help with a name as I’m sure I vaguely recognise him? 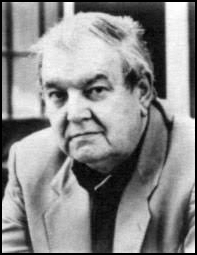 The author featured this week is George Macdonald Fraser. I recently picked up a few bits and pieces from his estate on eBay including a letter to him from PAN plus a PAN printers proof. As I have the other items I  include them on his page although not PAN but later titles PAN didn’t publish. George Macdonald Fraser’s extensive library was sold at auction and a catalogue can be viewed online by following the link HERE

NEWS JUST IN It was reported that John Le Carre died on Saturday. I’ll rescan all his covers for a tribute soon. From the web;
“LONDON (AP) — John le Carre, a spy turned novelist who became the preeminent writer of espionage fiction in English, has died at age 89 Le Carre’s literary agency, Curtis Brown, said Sunday that he died in Cornwall, southwest England on Saturday after a short illness. The death was not related to COVID-19. Born David Cornwell, le Carre worked for Britain’s intelligence service before turning his experience into fiction in works including “Tinker, Tailor, Soldier Spy” and “The Spy Who Came in from the Cold.”

Hans Helweg’s original artwork resumes next week. plus may have some great related news if the postman delivers by then.

I got an email from Sue Bell, Hans Helweg’s widow to ask if I would like a couple of folders of his sketches etc she had found while clearing out his studio. It would have been rude of me to refuse and what I received was a real treasure trove of preliminary sketches for covers for PAN, Puffin and a few other publishers. I will be adding them to the appropriate covers when I can work out which is which. Some are very obvious, so not so and some are a complete mystery so far but I do like a challenge.

This is just to show a random selection.