After putting the Bonham’s original PAN artwork auction catalogue on recently I thought I would follow it up with another catalogue from around the same time. I borrowed it off fellow Pan Fan Jules Burt and I have scanned it in to make a Flash book. This sale was in response to the Bonham’s one in that it was actually the artists themselves, namely Sam Peffer, Pat Owen and Edward Mortelmans, selling their artwork at an auction run by Simon Marsh-Devine in Bristol around the end of 1991. The catalogue is a photocopy and so the images are a little dark but with the listings I think most of them can be identified. Of note are the Peffer covers for several Fleming titles which I am told are now all owned by the Fleming family, can anyone confirm this? 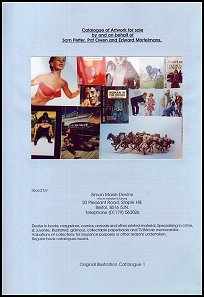