I’ve noticed a book on eBay that crops up now and again listed as a ‘Piccolo SPY Shelf’ title about the CIA. I’ve tended to ignore thinking it can’t be PAN as a children’s imprint and the CIA didn’t really seem to go together. In the end curiosity got the better of me and on checking found it was a Piccolo title plus there were two more in the series which I’ve scanned in and put HERE. The covers are by artist John Avon and I’ve emailed him but not had a reply up to now.

I also noticed on eBay several sellers of ‘Battle Cards’ of which number 7 refers to Terry Oakes who painted several covers for PAN/Piccolo. The problem was that to buy just the one specific card would cost me about $5 but I could buy 71 including number 7 for $1 so I now also have 70 all different cards from 1993 which might end up in a frame. 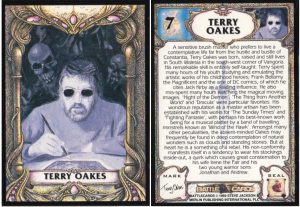 I’m also really pleased this week in that I have got another chapter from Gordon, who is 92, and was a member of the crew of the boat ‘Laloun’ which PAN bought to transport books from the printers in Paris back to London. It’s fascinating reading but I’ll save it until I’ve got all the parts. There is one bit I’ll share and that is the boat should have been called ‘Lalun’ as after the character in the Kipling story ‘On a City Wall’ Alan Bott initially wanted ‘Patricia’ but boats registered at Lloyds must have unique names and this and second choice ‘Lalun’ were already in use so the ‘o’ was added to make ‘Laloun’