All the shelving is now in place for my library and I’m slowly putting books on shelves and generally tidying up. I will include some photos next week so be warned.

I’ve just picked up a printers proof sheet on eBay for PAN’s “Saucy Postcards Annual 2” which I’ve scanned in and included HERE. I was very disappointed to find my first book of postcards has a very damaged cover which I’d not noticed until I scanned it so I’ve temporarily included an image from the web.

I also picked up some exhibitors campaign books for two films which have PAN book tie-ins and show the covers of the editions published at the same time which are HERE.

Finally we bit the bullet and went away in our camper in spite of the weather forecast and it was not too bad, just a little wet and not as cold as predicted. The site had electricity on prepayment meters and when we arrived ours still had £6.35 credit. No matter how hard I tried with everything switched on I only managed to reduce it by £3.00! While there we visited Coughton Court and I was hoping to include a photo in the section “as seen in National Trust” properties. I found a run of Dick Francis but my wife said they didn’t count as they were in the second-hand book shop! 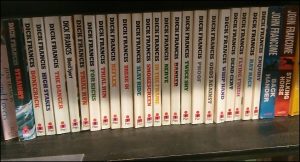 Waiting with much anticipation to see photos of your library fully set up !