“The journey of a thousand miles begins with one step” was supposedly said by Lao Tzu and I feel a bit like that with “The scanning of a thousand plus books starts with number one” I’m embarking on the task of rescanning all my numbered titles which would be 2,391 if they only had one edition but some have several different covers such as “Lost Horizon”. I’m also using it as a chance to rebuild my spreadsheet. So far I’ve done all of numbers 1 and 2!

This is the spreadsheet so far, still deciding if this is all the columns I’ll need? I’ve got thumbnails images as comments so they appear when I hover over plus hyperlinked to the image so I can edit them easily if need be.

I came across this newspaper article which seemed to be particularly pertinent after talking about the above.

I had to get a copy of Justin Marriott’s new publication “Hot Lead” (available from Amazon) as the cover features ‘Hart’ draw by Gino d’Achille although he now appears to be left handed. I’ve show all the ‘Hart covers’ before but HERE is the link again. 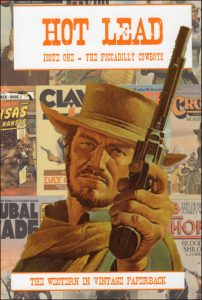 I have looked for some affordable original Gino artwork for a while and only this week realised I’ve had one for years. While sorting non PAN books I looked on the back of a Panther title of which I have the artwork and it is credited to Gino, something I’ve missed before. When I locate the artwork I’ll put it on a blog.