As promised last week I’ve scanned in my artwork by Gino D’Achille and although not PAN, Panther is close! Click HERE to see it. 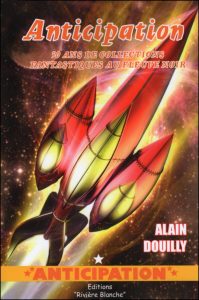 I also bought a copy of ‘Anticipation’ about the French mainly sci-fi series of books published by Fleuve Noir. Some sellers are asking over £50 for a copy so when I saw it at 12 euros on Amazon I ordered a copy. I then got a message from the seller asking where the price came from as it should be 25 euros? I said that was the price shown and then expected the order to be cancelled but it wasn’t and honoured at the price quoted. The postage was also 12 euros but turns out it was sent from a publishers here in the UK so maybe a bit step. Could be the postage and book price got mixed up but I’m happy.

Many of the covers were recycled from the ‘Young Artists’ group in the UK some starting out as PAN covers.. When I mentioned this on Facebook Jean-Daniel Brèque commented  “ALL of them were recycled. I know at least two writers who worked for Fleuve Noir at the time and who regularly went to the office of the publisher to pick their covers in advance. My friend Michel Pagel, who was working on a tetralogy, specifically picked up four Les Edwards covers featuring a skull in order to make his books stand out”

To see a couple of Terry Oakes covers click HERE. Jean-Daniel also mentioned a website which shows many examples, click HERE to go to the page for Terry Oakes then maybe use the search and go to the Les Edwards page.