I have heard back from Nicholas Blake from PAN/Macmillan who tells me unfortunately there isn’t a definitive list of Golden PAN Award winners so I see that as a challenge. I have started to make a list on a page which can be seen HERE or use the link at the top. If you know of any more that we can add then please email suggestions to tim@tikit.net or add them as a comment.

I’m going to add photos. press cutting etc to the page and here is one as a starter about Peter Benchley and ‘JAWS’ from 1975 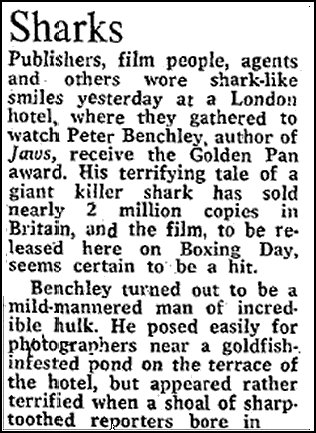 I mentioned ‘The Iron Tiger’ with a cover by Keith Scaife about which Keith said
“The one thing I do remember clearly is a sense of embarrassment over the cover for The Iron Tiger……  The publishers didn’t supply me with the whole novel to read whilst I was working out my rough ideas, just a couple of photocopied pages of the relevant passage they wanted illustrating – a Bedford truck on a mountain pass. Unfortunately, out of context I didn’t realise the time the story was set in and picked a 1970s Bedford to paint. It wasn’t until after the book was published that I found out it was WWII era…..  Readers must have wondered what on earth I was doing!!”
Well I’ve cheered Keith up in researching the truck he used and finding it was actually from 1952 and as the story line is set in the time of the Chinese invasion of Tibet he was only really a couple of years premature.

Finally one more for the “As Seen on Television” section. On the ‘Celebrity Antiques Roadtrip” last Tuesday they visited ‘Fanny’s Antiques’ in Reading and firstly showed a bookcase in the distance and then a close-up but fast scan down it. The Dick Francis titles are fairly obvious but I’ve given up trying to work out what some of the others on the lower shelves are. I’ve actually got around to sorting out the crazy formatting on this page. I eventually change the font from Arial to Verdana and all was OK and no I don’t understand why this affected the picture spacing either!