Just one item this week but it’s a good one as we can now add another name to the roll of honour for designed four of the covers for the PAN Horror Books series.

Having recently been in communication with artist Sean Coleman he mentioned a friend of his, a fellow artist named Hogan Brown. Hogan’s father, Ken Brown, was responsible for designing some of the covers in the PAN Horror Series back in the 1960s. Unfortunately, Ken is no longer with us but I would like to say a big “Thank You” to Ken’s wife Ruth who sent me the following recollections. 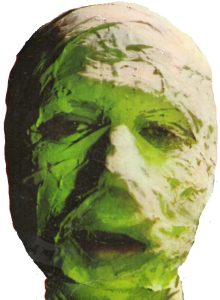 As far as I can remember…….

We had moved to our first “bought” house in Teddington 1967. It was a small modern house with a single open plan ground floor. (Relevant!)

My husband, Ken Brown, had joined the BBC as a graphic designer in 1964 when the in-house graphics department was formed, dealing with opening titles and promotional content for future programmes.

10 designers were recruited from various different disciplines – Ken came from the advertising agency J Walter Thompson, having trained as an illustrator at Birmingham College of Art.

As well as working 9 to 5 at the BBC, he also occasionally took on freelance work. He didn’t have an agent – it was usually through recommendation or word of mouth.

One such commission was to design the covers for the series of Pan Book of Horror Stories. Because of the day job, he did the designing and photographing of the covers at home, in the evening. I specifically specify the evening and not the weekend because by now we had a young son and the very nature of the content of the covers was obviously not particularly child friendly, so we had to make sure he was asleep! The sight of his father’s head swathed in bandages and smeared with blood might have damaged him for life

Then there was the head full of worms ….

…. and the wedding cake complete with dagger and dripping blood.

I think Ken sometimes borrowed things from a friend in the BBC props department (a serious misdemeanor) ……. I know he borrowed a cobweb device from there.

I don’t know where he got the rubber head from (he cut it open and added the worms) but it lived in the top of the wardrobe for several years after the “shoot”. And the wedding cake (made out of cardboard and plaster) was consigned to the garage.
It was all VERY low tech but great fun to do and enormously successful – hence the interest to this day.
I hope this adds some insight and is of interest.

PS. My son has grown up into a very nice, well-adjusted person ……… so no harm done!

I found the wedding cake drying in the airing cupboard when I was a kid, which was a bit of a shock, I also kept the head with the worms for many years, though what happened to it I do not know.