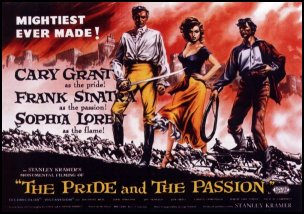 While sorting through some later titles I began to notice how many editions of ‘The Gun’ by C. S. Forester I seem to have on my shelves. As you can see I have found at least 7 different ones albeit some having very subtle differences. The book was made in to the film ‘The Pride and The Passion’ in 1957

The cover artwork is by David Tayler who lived in Brighton. He did several covers for PAN (more in another blog) but he would take two or three weeks to produce a cover whereas others like Sam Peffer would take two or three days hence Tayler didn’t find it very profitable. I’ve also included an image of the 2001 reprint using the same artwork, I wonder if they acknowledge the source?