I was very sorry to hear from Anna Ludlow’s family that she had passed away peacefully last month. Anna and I emailed regularly regarding ‘Angelique’ speculating as to who the cover artists might be. Anna ran the ‘World of Angelique’ website which is a veritable treasure trove of all things ‘Anne Golon‘  I just hope it will be possible to keep it as a lasting legacy to all her hard work over the years.
UPDATE I have just heard from Andrew to say “Anna paid for the site to keep going for some time and I will seek to retain it – if I can find a way to access it. Anna left me five pages of detailed passwords – but my IT skills were never as good as hers” 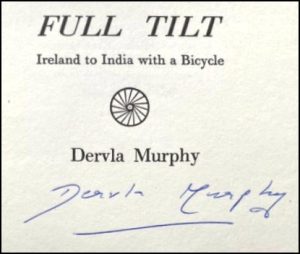 It was also sad to hear that Dervla Murphy had died last Sunday at the age of 90.  She was born on the 28 November 1931 and was an Irish touring cyclist and author of adventure travel books, writing for more than 50 years. Dervla is probably best known for her book ‘Full Tilt:’ about an overland cycling trip to India.  This cover hasn’t been miss scanned , it really was trimmed to a much smaller size than normal! She followed this with work helping Tibetan refugees in India and Nepal which she wrote about in ‘Tibetan Foothold’ also in PAN. 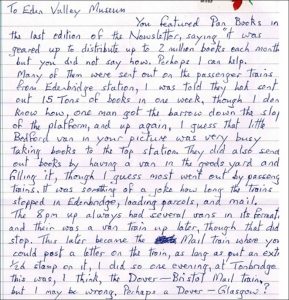 I was really pleased to get an email from Joan of the Eden Valley Museum in Edenbridge who, a while ago, wrote an article in their newsletter about PAN as they had a dispatch centre in the town. Joan said she had had a letter from a gentleman who worked there in the 50’s writing about sending the books all over the country from Edenbridge Mainline Station. She said the writer is more than happy for me to include it here so click on the small letter to get a larger version.

Below is a photograph of Edenbridge Station in the 1950’s